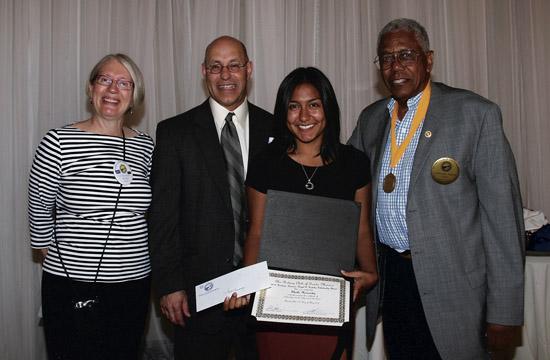 With their gift, Rotarians promote peace, fight disease, provide clean water, save mothers and children, support education and grow local economies through grants – projects include vocational training for teachers establishing an early childhood education center in South Africa; providing water filters, toilet blocks, and hygiene training to prevent fluorosis in a community in India; and distributing insecticide-treated mosquito nets and medical services that help prevent malaria in Mali, among others.

One of the most recognizable grants is raising money for polio eradication. All funds raised have supported crucial immunization activities in polio-affected countries. In 2014, there were 359 new cases of the wild poliovirus, but in 2015, there were 27 polio cases.

In 2013, the Bill and Melinda Gates Foundation extended that partnership in a two-for-one match agreement up to $35 million per year through 2018.

Another speak, Myles Pritchard, a former Bahamian Olympian in sailing and current financial wealth advisor, encouraged the audience to attend the Special Olympics opening ceremony and to sponsor athletes as ways of supporting the games.

“These athletes are no different from us, they’re no more special than I am,” Pritchard said. “The fact that they’re special Olympic athletes is irrelevant. It’s a chance that you have to go and change a person’s life like my life has changed. And I ask each and every one of you to get involved in the Special Olympics.”

The 14th Special Olympics Games will open July 25 in the Los Angeles Memorial Coliseum to welcome more than 7,000 Special Olympic athletes from 177 nations. Tickets are $35 and T-shirts are $35.

A scholarship, sponsored by the law firm of Harding Larmore Kutcher & Kozal, LLP, was awarded to Shaila Hernandez, who will attend Occidental College in the fall.

A grant was also made to the Westside Family Health Center, an organization providing primary health care to low-income families, women and children in Santa Monica on Ocean Park Blvd. for 41 years, represented by Molly Maher. Maher said the check will go to two of their four primary programs: pediatrics and pre-natal care. Rotarian Melissa Dagodag presented the check.