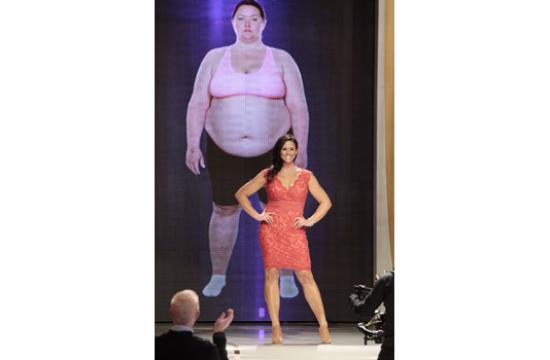 Losing weight is a challenge that may seem unattainable to some people who set out on the task. However, it’s not entirely impossible, as shown by Santa Monica resident Rachel Paul, whose crucible in burning fat was chronicled in the ABC series “Extreme Weight Loss” on Tuesday night.

Paul is a former dancer as well as dance instructor at UCLA and Notre Dame High School. She was a dance major at UCLA, even being part the dance team, winning several dance and cheer competitions throughout the years, before settling down to coach future generations of dancers.

However, one tragic event in her life caused a turn for the worst: Paul discovered that her boyfriend was cheating on her.

“It was a relationship that I saw a future in, and went there emotionally more than I ever had before,” she said. “When I found out he was cheating it was devastating. I know it happens all the time to other people, but I started turning to food for comfort. That’s when the emotional eating really started.”

Before applying for “Extreme Weight Loss”, she said she set out to lose weight on her own, but it proved to be challenging.

“That’s part of the struggle, trying to get it all under control, starting a diet, but I wasn’t tackling the true problems of forgiving and learning to love myself,” she said.

It wasn’t just the actual weight to drop; it was her issues surrounding the break-up. She gained help through therapy.

Paul said she was miserable at her job.

“I would sweat easily, and I couldn’t demonstrate anything due to my weight,” she said. “My back and knees always hurt; I just lacked confidence.”

She needed help. At her friends’ encouragement, she wrote a raw, emotional letter to Chris Powell, a personal trainer and host of “Extreme Weight Loss”.

When she gained access to the show, she was astounded at how much she actually weighed.

“It was the first time I’d seen a scale,” she admitted. “I was over 300 pounds, and I realized I really had a problem.”

The weight loss program took place over the course of a year, with the first three months in Denver, Colorado.

The latter nine were back in her native Santa Monica. She only cooked for herself, eschewing eating out, and continuing the regiment implemented for her out in the rocky mountain high.

The trainers were always a phone call away, allowing her self reliance in her weight loss. She also had the support system she needed to continue in her moments of weakness.

Her advice to those who want to lose weight themselves is a simple mantra: “Start moving, no matter how much you hate it. Take it one day at a time.”

She also advises a nutritional plan, but also encourages anyone to pick themself back up and continue on the diet should they cheat, as it’s not the end of the world. Much like her year-long process of picking herself back up, everyone is able to do so from the depths of despair.