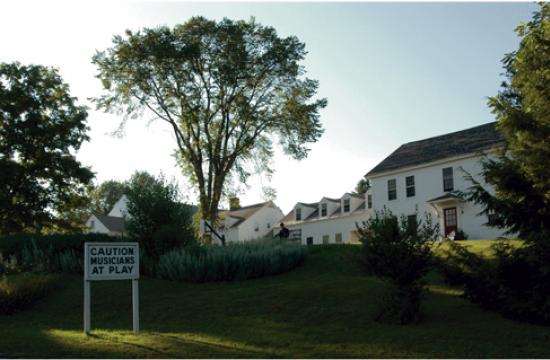 Three famous European music families – the Serkin, Busch and Moyse families – escaped the horrors of Nazi Germany. They reunited in Marlboro, Vermont in the early 1950’s around the concept of learning music in a family and communal environment.

With the rise of Hitler in Germany in 1933, the Serkins and the Busches went to Switzerland. In 1939 with Hitler’s Nazis on the march, they fled to the United States. The Busch family moved soon after their arrival in the United States to Vermont, which they had been told was like Switzerland, the Serkins came later and the Moyse family arrived in 1950.

Walter Hendricks is a key part of this story. In 1946, right after the end of WWII, Hendricks, founder of Marlboro College, bought the Dal Rymple Dairy Farm in Marlboro, Vermont. His vision was to start a small Liberal Arts College and to help returning veterans. Funding came from the GI Bill and a loan from Brattleboro Savings and Loan. He also wanted music to be an important part of the College.

The Marlboro Music Festival was founded in 1951 by the Serkin family, the Busch family and the Moyse family. Rudolf Serkin “felt what was really needed was a place to bring exceptional young musicians and leading professional musicians together and by immersing them in studies and practice for two months you could teach them to have something important to say about music.”

The Festival has continued that tradition. For two months each summer both young, aspiring musicians and professional musicians come to Marlboro, Vermont to practice music together in an informal and community setting.

Danny Kim, violist, the second generation of his family to be a Marlboro Festival participant, said, “Growing up my involvement with music was through my parents. Now I have a lot of musician friends and I’m very grateful to be able to love music.”

“If you’re surrounded by music when you’re growing up then music is just part of who you are,” said Kim. “Both my parents are violinists. I started learning the violin when I was five. I always studied music. My mother is a violinist and a Suzuki teacher. Both of my parents are musicians. My father, Young-Nam Kim is a violinist, a professor at the University of Minnesota School of Music and founded, in 2002, the Northern Lights Chamber Music Festival.”

“I studied music and took all the regular high school classes, played soccer and was ‘just a teenager,” said Kim.

After Central High School Kim went on to study at the University of Wisconsin at Madison and then to New York’s Juilliard School of Music. At Wisconsin he concentrated on the viola.

“I felt really good by my sophomore year and I started playing with other musicians,” Kim said. “The more I would study and practice the more I grew to love the music. By the time I got to Juilliard I knew the viola was my instrument and I was very lucky to study with Samuel Rhodes.”

Frank Salomon, the co-administrator of the Marlboro Music Festival, said Kim is a wonderful example of the Marlboro ethic of taking traditions and developing them through generations of musicians.

“They came to the United States in 1935,” Salomon said. “My father was a professor and my mother was one of the first women medical doctors in Germany. They were able to come because Alvin Johnson, an economist and a co-founder and first director of the New School in New York, had offered my father a job teaching at the New School.

“When they arrived in the United States the American doctor at the Embassy said my father was physically unable to earn his living and the fear was that they would be sent back to Germany.

“Johnson came to my parents rescue, as he had for so many people fleeing the Nazis.”

“I didn’t hire this man to teach gymnastics I hired him to teach Sociology,” said Johnson to the emigration authorities. And it was on his word that my parents were allowed to remain in the United States.

“When I was a child, running around Manhattan, my mother had subscription tickets for the New Friends of Music Chamber Orchestra and our family went to their concerts and to children’s concerts and Bach concerts and more,” said Salomon of his early introduction to classical music.

Salomon is committed to classical music. He has represented Richard Goode, Jaime Laredo, Leon Fleisher, Masaaki Suzuki, Lisa de la Salle, Simon Rattle, and more. He is equally committed to new and young musicians as is demonstrated by his 50-plus year tenure with the Festival.

“In chamber music you learn your part and the score and learn to listen and compromise and be supportive of your colleagues and make multiple voices into one,” said Salomon. “The important thing is that these are life lessons as well as music lessons.

“Our current Director, Mitsuko Uchida, continues the legacy of the founders and also continues the tradition of adding of imprint of each succeeding generation,” said Salomon.

Festival participants are at Marlboro for two months. In late July and early August of each year they offer public concerts. The programs are chosen by the musicians and are announced a week or so before the performances.

Danny Kim said it all when he said, “The level of playing is so high and you have so much practice time with other musicians. It’s a once in a lifetime opportunity to work on a piece of music you love with great musicians.”

For recordings of performances and information about the Festival go to: www.Marlboromusic.org. For more information on Marlboro College go to: www.marlboro.edu.