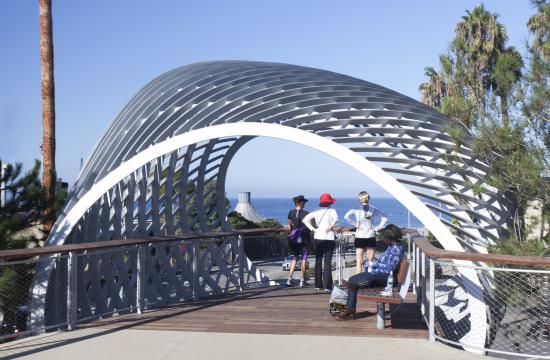 The City of Santa Monica and James Corner Field Operations announced that Santa Monica’s Tongva Park/Ken Genser Square Project has been selected as one of six finalists in the Urban Land Institute’s Global Award of Excellence For Urban Open Space.

This is a prestigious annual competition that recognizes outstanding examples of successful large and small-scale public spaces that have enriched and revitalized their surrounding communities.

Santa Monica’s Tongva Park/Ken Genser Square Project was selected based on the fact that the project embodies a new type of urban landscape that is active innovative, resource conscious, and natural.

Shaped by extensive public participation, the design by James Corner Field Operations creates a contemporary and transformative series of gardens and active spaces that symbolically redefine and interconnect the center of Santa Monica.

The project will now compete against other finalist projects in the US, Singapore, and China.

“Tongva Park enjoyed not only an incomparable location but an unprecedented public process. We developed a true community vision for what had been a drab asphalt parking lot,” said Santa Monica Mayor Kevin McKeown. “Working with James Corner Field Operations, and engaging residents and other stakeholders along with our skilled and inspired City staff, we boldly reshaped a new public space that brings our whole Civic Center to life, linking City Hall with the Santa Monica Pier. Watching visitors and families enjoy Tongva Park has been gratifying enough, and our acknowledgement as a finalist in this prestigious global award is an exciting bonus.”

Upon opening in 2013, Tongva Park and Ken Genser Square were an instant hit with the Santa Monica community and tourists from around the world.

The project has received significant acclaim from both industry critics and popular media.

The design for the parks was inspired by the arroyo wash once common in this Southern California region.

Through creative use of space, braided pathways, 18’ high overlooks, and a sustainable plant palette that changes dynamically with the seasons, the parks feel much larger than they are, accommodating a wide range of uses and users on a relatively small footprint of just 7 acres.

“It is extremely significant that Tongva Park has been shortlisted for the very prestigious ULI Award,” said James Corner, internationally-renown designer and head of James Corner Field Operations. “The Park is deserving because it is an exemplary project where extensive public participation helped to shape a beautiful and innovative outcome, and where the surrounding urban fabric has benefited so significantly from this transformation. The Park is today a newly inter-connected center-piece for Santa Monica, both as heartbeat and catalyst for renewal.”

The six finalists were selected from an impressive collection of entries from all corners of the globe. The jury looked at a broad set of criteria that included overall project design and how each project affected or revived its surrounding area, in addition to landscape architecture and urban design.

To be eligible for the competition, an open space project must be used intensively on a daily basis by a broad spectrum of users; promote the physical, social, and economic health of the larger community; and provide lessons, strategies, and techniques that could be used or adapted in other communities. The winning project is scheduled to be announced in October 2015.