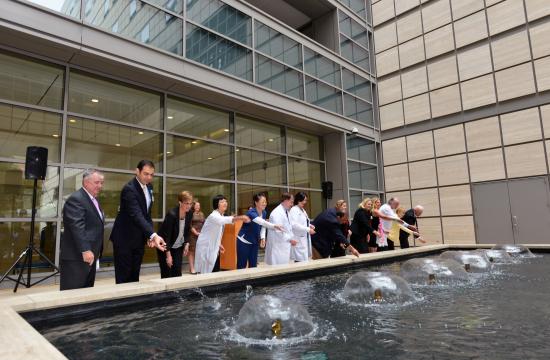 Two years ago, Rachel Greenberg of Marina del Rey went out to run a few errands. While she was gone, her husband Glenn suffered a massive brain hemorrhage. He was immediately taken to Ronald Reagan UCLA Medical Center where physicians explained he had suffered the worst kind of brain bleed.

They operated, but after four days it was clear that the hemorrhage had caused too much damage, and he would not survive. Glenn was kept on a ventilator until family members from the East Coast could arrive. During this vigil, Rachel learned that when Glenn had renewed his driver’s license a few months earlier, he had signed up to become an organ donor.

“In the midst of the most unimaginable grief and shock, I felt pride for Glenn’s decision to be a donor in what would be the last chapter of his life,” said Rachel. “Now he lives on in others.”

Glenn’s donation went on to help 89 individuals, ranging in age from 19 to 92 years old.

“Organ donation is a positive and powerful thing we can do to help families and loved ones transition from grief to opportunity to help others who are in need,” said Dr. Paul Vespa, director of neurocritical care at Reagan UCLA Medical Center and a professor of neurosurgery and neurology at the David Geffen School of Medicine at UCLA.

To honor these special donors who became organ, eye and tissue donors at the time of their deaths at Reagan UCLA Medical Center or UCLA Medical Center, Santa Monica, UCLA Health and One Legacy, a nonprofit organization dedicated to saving lives through organ and tissue donation in greater Los Angeles, held a ceremony Tuesday, July 21, to dedicate the Gift of Life Fountain, located at Reagan UCLA Medical Center’s Garden of Peace. Loved ones of donors will be able to place special engraved medallions in the water; the donor’s name will also be added to an online donor recognition webpage.

The concept of honoring organ, eye and tissue donors has been years in the making at UCLA. The project finally became a reality, thanks to a monetary gift made by the late Gary Foxen, a UCLA lung transplant recipient.

“Gary was so thankful for the gift that extended his life for more than 15 years; he was always looking for ways to recognize the donors of the world,” said his widow, Lois Foxen. “He came up with the idea for the Donate Life Rose Parade Float, and now he continues to recognize donors through this memorial.”

At the dedication ceremony led by the Rev. Karen Schnell, director of spiritual care at UCLA Health, a plaque was unveiled by Richard Azar, executive director of general services at UCLA. The plaque reads: “Lovingly placed by their family and friends, each medallion in this fountain commemorates an individual who gave the gift of life and health to others through organ, eye and tissue donation.”

Representatives from UCLA, One Legacy and families then ceremoniously tossed medallions that represented organ, eye and tissue donors from 2008 to 2014 into the water.

“Throughout the coming days, weeks and months, we will see family members coming to the memorial fountain to place a medallion honoring their loved one in the water,” said Schnell, who called the fountain a sacred site. “This is a sacred moment, and we as the UCLA Health community should be sensitive to what is happening and give these families space to honor their very personal moment.”

For UCLA nurse Barbara Anderson, who has worked in the neuroscience field for years, the memorial represents humanity at its very best.

“I have seen families go through the agony of sudden, devastating death that has come to their loved ones. They come to the hospital with hope and leave with emptiness,” said Anderson, the unit director of the Neuroscience/Trauma Intensive Care Unit at UCLA. “This memorial is for those who have given the gift, so they will not be forgotten, and so their families know we have not forgotten them.”

For more information on the donor memorial, visit www.transplants.ucla.edu/GiftofLife.