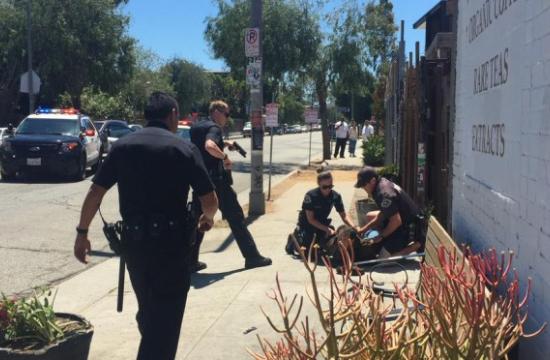 A man who was shot by Los Angeles police after allegedly advancing on officers with a knife at a Venice coffeehouse on Monday has died, authorities said today.

A witness said Davis sat down on the patio but then turned and began vomiting. He had been drinking from a bottle of black liquid, the witness — an employee of the coffeehouse — told a reporter at the scene.

When a store manager came out to talk to Davis, he became unruly and pulled out the knife, prompting a call to police, the employee said.

“Officers observed Davis sitting at a table in the patio area, armed with a knife,” a police statement said.

“They began giving commands for Davis to drop the knife, however he refused to comply,” police said.

“Davis stood up and began to aggressively approach the officers. One officer deployed a Taser, however it did not have an effect on Davis. Davis continued his advance on officers while still armed with the knife and an officer-involved shooting occurred,” police said.

The shooting is being investigated by the LAPD’s Force Investigation Division, the Office of the Inspector General and a shooting team from the Los Angeles County District Attorney’s Justice System Integrity Division.