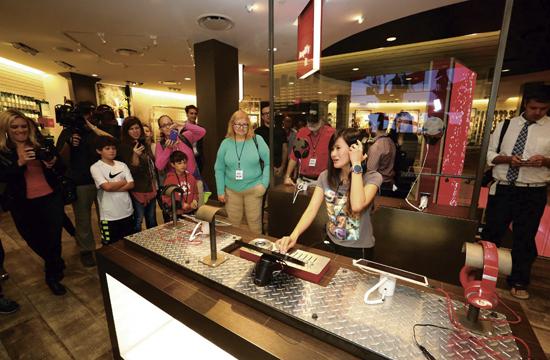 Anyone walking down the Third Street Promenade may have seen dozens of people doing aerobics while a person on a stage led them in exercises last Saturday, July 18. No, it wasn’t a cult. It was the Verizon flagship store’s grand opening party.

The event was complete with a “respect ya deck” event, where attendees designed their own skateboard deck, aforementioned fitness classes, and so many other events to enjoy.

The celebration isn’t just one where you would go in, stuff your face with hors devours and make out the door before anyone noticed. It was a more interactive experience, much like the store itself.

Unlike the average Verizon store, this one boasts attractions like the ability to custom make your own phone case, get a virtual reality experience of the NFL, or play video games using only your body.

The event was much the same way, with the ability to design your own skateboard deck, as mentioned before, burn off a few calories, or listen to a previously unsigned band that Verizon themselves discovered.

On top of that, there was an extreme skate competition, which proved to be a wonder to those watching, as typically the only experiences someone has with skateboard tricks are Tony Hawk’s Pro Skater and the skate rats around the promenade who can’t land a kickflip. These young people skating, on the other hand, were quite a sight, landing tricks never thought imaginable. Some of them were even in their early to mid teens.

The event was definitely a cause for applause, as it heralded the grand opening of a store that is more than just a person in a red polo (not Jake from State Farm) upgrading your phone for you, this store is made to be not just a trip, but a destination. Hence “destination store.” Verizon has certainly outdone itself this time.

Verizon has certainly outdone itself with the opening of its destination fifth store, after Chicago, Boston, Houston, and the Mall of America in Bloomington, Minnesota.

If you want a new phone case, phone, tablet, a place to charge your phone while you shop, or a soccer ball that tracks how good your kicks are, all with great service, come on down to the Third Street Promenade, where this Verizon Flagship store will take care of you.

The store is located at 1322 Third Street Promenade (near Arizona Ave). It is open from 10 am to 9 pm Monday through Saturday, and from 11 am to 9 pm on Sundays.