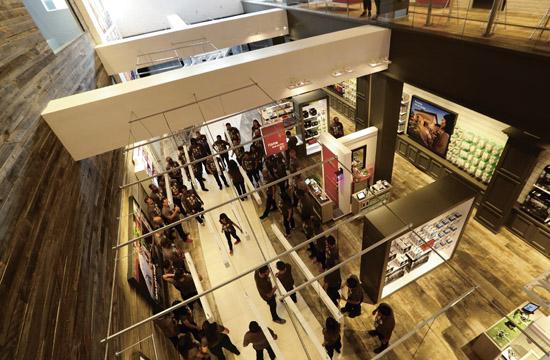 On a rare cloudy morning on the Third Street Promenade on Wednesday, a new store opens its doors to the public. Its purpose is to provide new technology to those who seek it – to those who want to leap into the future. No, it is not the Apple store. It’s Verizon Wireless.

When one enters a Verizon Wireless store, they expect the same thing they’d see in something like an AT&T or Sprint store: employees in matching polos of the carrier’s color, and phones lining the walls. This Verizon Wireless store is different, however. This is what’s called a “Destination Store,” which is exactly what the name implies: the place a metaphorical desert wanderer would be seeking after weeks without his phone working.

The store itself has a bit of a Times Square feel, with a massive two story jumbotron stretching like a citadel from the ground floor up to the top with the staircase encircling it. However, the mural made of phone cases that says “Santa Monica”, the employees wearing matching t-shirts rather than polos, and the floor and wall paneling made of what looks like driftwood give it a distinctly Southern California look.

“For our customers, there’s simply no other retail shopping experience like this in any industry,” said Luis Cruz, Verizon’s Southern California president. And boy was he right.

The store is split up into “zones”, which include “Customize It”, “Get Fit”, “Home Immersion”, and many others. Features of these zones include things like a “selfie booth” where one can use gear provided to craft the perfect selfie. And they can use that picture to make a custom phone case, which is delivered via vacuum tube in a capsule from the second floor, Futurama style. Not many a Verizon store can boast that. The second floor has everything from an NFL virtual reality experience to a Nintendo Wii-like station with the ability to play mini games on a giant screen, no controller needed.

It’s not all just fun and games however, the store offers workshops for both business and pleasure needs, which can help Grandma learn how to use that tablet she got to facetime her grandkids, or just learn how to promote synergy at the office.

This destination store is only the fifth in the country to be built. The first one was built in 2013 in the Mall of America in Minnesota, with others following in Chicago, Houston, and Boston. According to General Manager Cherryanne Angoy, this store in Santa Monica has some similarities, such as many of the zones. There are some unique differences between stores however, with Santa Monica being able to boast the mural, the selfie station, and a wall dedicated specifically to tablets, among many others.

This store is more than just your average Verizon Wireless store where you go to upgrade a phone or buy a new charger. It’s full of so many things that haven’t been mentioned above, and can only be fully felt by experiencing the store in the flesh. Make this new citadel the next destination when on the Promenade this summer.

The store is located at 1322 Third Street Promenade (near Arizona Ave). It is now open from 10 am to 9 pm Monday through Saturday, and from 11 am to 9 pm on Sundays.