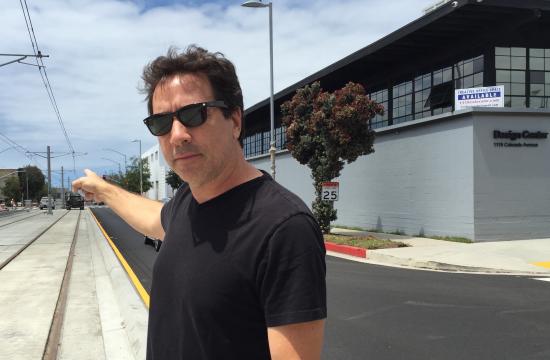 The gnashing sound of a jackhammer’s metal tooth on the cement pavement can be heard in his office for hours at a time, sometimes getting so bad and incessant that he is forced to leave the building. This is something that has been going on for almost four years since the start of the construction on Expo Line Phase 2, according to Rodney Liber, Managing Partner of Capital Innovations Inc. with its headquarters at 1119 Colorado Ave.

“This jack hammering is happening a block and a half away, and I am hearing it like it’s right next door,” Liber said. “To put up with that for two to three hours a stretch has impacted my business. People are moving out. People don’t want to be here with those circumstances.”

Liber rents out creative office space across Santa Monica – one of his buildings is a couple of block from his headquarters, which is also affected by construction noise.

An Electrical Supply store just a couple of blocks up the street hung a bright yellow sign next to their front door. It read, “We are Moving Because of Expo Construction.”

The project is about 90 percent complete. Train testing began earlier this month with unpowered train carriages being pulled from Culver City to downtown Santa Monica. The first powered train tests are set to begin next week.

Liber feels that those in charge of the Expo Line construction haven’t done enough to help mitigate the problems caused by the construction.

“There wasn’t a lot of foresight from the City and the contractor,” he said. “I believe some bad decisions were made on where the placement was, but I can’t do anything about the bad decisions. We’re nearing the end and my beef is they didn’t make a lot of efforts to make the construction process as least impactful as possible.”

Liber described the track’s location along the center of Colorado Ave. in Santa Monica as “trying to make a square peg fit in a round hole,” gesturing towards the construction just outside his front door.

A resident in the nearby neighborhood sympathized with Liber, who he said should be angry by all the construction.

Unlike Liber, he commutes early in the morning, missing out on the gnawing sounds of construction during the day, something that has become as common as Santa Monica sunshine over the last four years to Liber.

When discussions were going on about where the Expo line would be built, Liber made sure that his voice was heard, participating at City Council meetings and emailing city officials, Councilmembers, and representatives of The Exposition Metro Line Construction Authority, an independent transportation planning, design, and construction agency created by state legislation in 2003 for the purpose of awarding and overseeing final design and construction contracts for completion of the 15.2 mile, $2.5 billion Exposition Light Rail Line.

“What are you talking about going down Colorado,” said Liber, as if he were addressing someone with the authority to make the change, “go down Olympic because there is a median, the cross-streets are already blocked off. What I was concerned about was the sketches that I saw. It was going to put the stop literally 22 feet from my front door over on 16 Street.”

Despite his and many others’ protests against building the Expo Line down Colorado Avenue, which, when compared to Olympic, seems ill equipped for the project and is now reduced to only one lane, officials still decided on Colorado.

However, according to Santa Monica Mayor Kevin McKeown, this isn’t the first time Colorado Avenue has been a site for trains.

“What we now call Colorado Avenue was once named Railroad Avenue, so the idea of a train running directly into downtown and to the Pier is not entirely new,” McKeown said.

“The routing choices into Santa Monica’s downtown were limited, and we were asked to choose between a street-running line down Colorado and an elevated line down Olympic. The elevated line would have created a 35-foot wall between the north and south sides of town, and taken out all the coral trees currently along the Olympic median. After much community input, Santa Monica preferred the street-running line.”

When asked how much control the City of Santa Monica had over the Expo Line, McKeown said the “final decisions were certainly Metro’s to make, either directly or through their subsidiary the Expo Construction Authority.”

“That’s why we got stuck with a maintenance yard in the Pico neighborhood,” he continued, “not something we wanted for our residents.”

Liber said he has been stuck with all the baggage that comes with years of construction on a train station just outside his property and just down the road from his office. This, Liber contends, the disregard of the business owners and residents directly impacted by all the construction, is his complaint. To Liber, those in charge did nothing to help mitigate his concerns.

“I feel I am suffering all the impact…with the noise and the trains,” Liber said. “I can’t make a left turn out of this building anymore. The city didn’t do much to say, ‘because you’re impacted negatively, let’s pay special attention to anything you have.’”

“They took away my planter, just shoved it aside. No one even talked to me and said ‘hey, this is public property’ or something,” Liber said, motioning towards where his planter once extended to. The planter, as Liber points out, gesturing down the street towards residential properties, is in line with home owners’ front lawns, making the planter, presumably, Liber’s.

“I get business through an aesthetic,” Liber said. “I mean if you look at my building there is fresh paint, a clean sign, and it’s well kept. That’s how I make money. That’s my business, to rent out space. The construction deters that. It doesn’t help my business.”

To get anything done, Liber said, he has to jump up and down like “Yosemite Sam” and then, just maybe, and definitely slowly, something will happen. Like any large government project, the red tape is so thick it’s hard to see who’s even on the other side pulling the strings.

Taking matters into his own hands, Liber has called those in charge of operations to band-aid some of the minutiae they forgot about such as adding temporary parking on side streets and bringing to their attention the issue of the one-lane street Colorado has become – in addition to the damage already done around his office.

“It’s just a question of them not really being attentive to the small things,” Liber continued, “and the people who are impacted by them.”