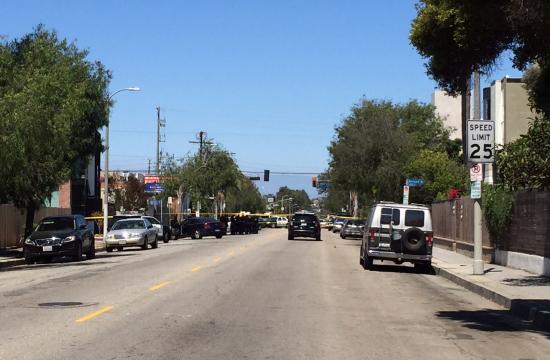 Police shot a man in the patio of a coffeehouse in Venice on Monday afternoon after he brandished a knife.

The shooting occurred on the patio of Groundwork Coffee Co. at 671 Rose Ave. about 2 p.m.

An employee told a reporter that the man appeared to be mentally ill. He said there are a number of disturbed people who live in the area and wander into the coffeehouse.

The employee said the unidentified suspect sat down but then turned and began vomiting. He had been drinking from a bottle of black liquid that appeared to be a mix of water and cigarette butts, according to the witness.

When a store manager came out to talk to the man, he became unruly and pulled a knife, according the employee.

Two officers confronted the man — one had a Taser and the other a gun, the witness said. He said the officer with the Taser used his weapon first, but it appeared to have no effect.

The officers warned the man to drop the knife, but he refused and walked toward them, according to the witness who said the other officer then fired two or three rounds.