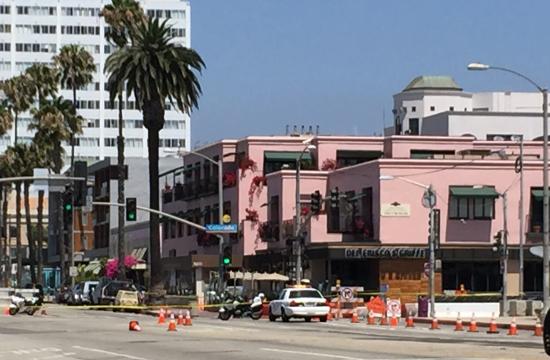 A woman drove into an underground parking structure in Santa Monica this morning and handed a valet attendant a note saying she had a bomb in her vehicle, but no bomb was found and the woman was taken into custody.

After the woman parked the vehicle, the attendant called police, who responded to the parking structure in the 1500 block of Ocean Avenue, near Colorado Avenue, about 10:10 a.m., along with the Sheriff’s Arson/Explosives Detail, Special Enforcement Bureau, Emergency Services Detail and agents from the FBI, said Deputy Ryan Rouzan of the Los Angeles County Sheriff’s Information Bureau.

Police evacuated the building, but were unable to locate the woman and her vehicle, Rouzan said.

A robot deployed by the Sheriff’s Arson/Explosives Detail eventually located the woman and vehicle, at which time she tried to drive out of the parking lot, Rouzan said.

The robot blocked her exit and the woman surrendered to police who had contained the area, he said.

“An extensive search of the vehicle was conducted and it was determined no explosives were in the car,” Rouzan said.

The woman — who appeared to be depressed, distraught and possibly drunk — said she had lost a child and wanted to die, the deputy said.

It’s unclear if she was arrested.

CORRECTION: In an early report posted Thursday on smmirror.com, it was reported that the bomb threat was taking place at Del Frisco’s Grille, based on information from a SMPD officer on the police perimeter. This information was incorrect.

“The bomb threat was not in the restaurant; it was in the property next door,” said Del Frisco’s Grille General Manager Jeffery Harrelson. “The entire area was evacuated and we were not allowed to open the restaurant to our employees or guests until it was safe.”