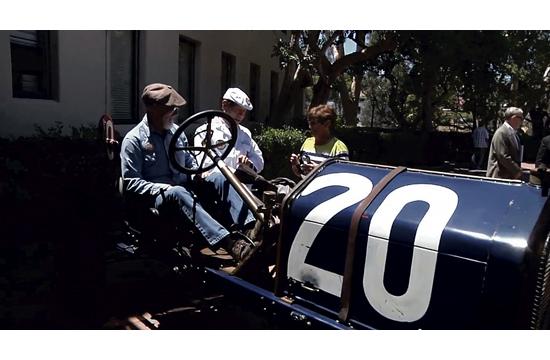 Last week’s Rotary meeting was a crash course lesson in Santa Monica’s genesis. The main theme was the city’s roots as an auto racing destination, and the syllabus included buzzworthy L.A. trivia, as well as which streets used to be the auto track.

Harold Osmer, historian and author of such books as “Where They Raced” and “Real Road Racing,” began his lecture at the beginning of Santa Monica, when it was just a rigged coastline – “nothing worth coming up seeing.”

People started coming to Santa Monica in the 1880s on trains, when a ticket during the railroad wars would cost upwards of $185 from Missouri. The train station stopped at the top of the Santa Monica Canyon near Patrick’s Roadhouse.

“What southern California had was a lot of space and a really good climate,” said Osmer, a former engineer who pursued a degree in geography. “To get to Southern California you had to want to be here. You had to target this place. The people who came here initially came for their health; later on they came because it provided a lot of opportunity. Problem was, they had to create that opportunity.”

When Osmer was writing his graduate thesis that would eventually turn into a book, he focused on auto racetracks in Los Angeles; “where they were, what’s there today, and what affect the race track had on future landings.”

“A lot of Santa Monica history can be found form 1923 forward for some reason, but Santa Monica road races actually took place from 1909 to 1919. My goal here today is to point out how important the road races were to Santa Monica’s autonomy from the big nasty neighbor of Los Angeles,” Osmer told the audience.

The first main attraction of Santa Monica was the ill-fated Arcardia Hotel, on Ocean Ave. just south of the Pier. At that time, the city was competing with Venice, which had the topographical advantage of being sea level. At the Arcadia Hotel, you had to go down long flights of stairs to get to the beach and walk back up at the end of the day.

“This wound up to be probably the first celebrity trials in Los Angeles, because in 1903 nobody was here yet,” Osmer said.

His sentence? Assault with a deadly weapon claiming alcohol insanity – “in essence, the Twinkie defense.”

After two years at San Quentin, he rehabilitated his public image and donated today’s landmarks like Griffith Park, the Observatory, and the Greek Theatre.

After 10 years in business, the state-of-the-art Arcadia Hotel shut down.

“You couldn’t get anyone to stay in Santa Monica, that was the problem.”

As Santa Monica went through boom and bust periods of tourism, the city was contacted by Auto Dealers Association and got the idea to attract attention through some good old-fashioned racing.

The first organized auto race took place in 1903, and from 1909 to 1919 Santa Monica experienced a growth spurt.

The most famous in Santa Monica ran from from Ocean Ave. to Wilshire to San Vicente boulevards. Fun fact: The corner of Ocean and Wilshire was called Dead Mans Curve.

“Nobody ever died at Dead Man’s Curve – they called it that because it sells a lot of newspaper. It’s about potential and watching this for whatever demented reasons people did,” Osmer said. “They started off on Ocean right where the avenue starts and come down and made that tight left turn … Next time you go that way, notice as you turn onto Wilshire, you’re now going uphill. You go all the way to the Old Soldier’s Home, which is the Veteran’ Center, and turn around and come down San Vicente and this is downhill.”

“Auto racing in this period was simply the biggest spectator-sporting event. Nothing else was bigger. And there was no radio or television or other ways to spread the word,” he said.

The stars of the West Coast racing world were tough characters from the late 1920s, early 30s era.

These road races were relived that night, where the Fairmont Miramar Hotel and Bungalows sponsored the re-enactment to benefit the Santa Monica History Museum.