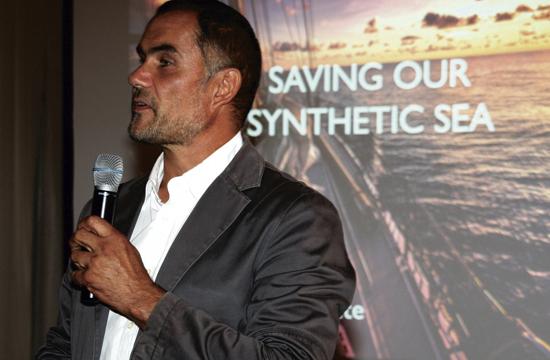 That fabled Texas-sized island made of trash in our ocean, the Great Pacific garbage patch, does not exist. Nor is there a plastic zoo or trash vortex. It’s something more insidious that exists in our waters, and it can’t be cleaned up.

“The best name for it is a plastic smog,” said Marcus Eriksen, co-founder of the Santa Monica-based non-profit group, 5 Gyres Institute.

But this plastic smog – “like horizontal smoke stacks pumping small particles of plastic into the worlds oceans” – can’t be scooped out of the waters. Nor can it be cleaned out.

But there is hope, according to 5 Gyres, at stopping this haze of trash, mostly made up of micro-particles of plastic; it involves stopping the plastic at the source.

Husband-and-wife team Eriksen and Anna Cummins spoke to Santa Monica Rotarians last Friday, July 31 about the research 5 Gyres has conducted in identifying how much trash and plastic exists in the ocean today, where it comes from, and what it’s impact is and will continue to be.

The 5 Gyres Institute is the first research organization to study all five oceans, and the only organization to study the southern hemisphere gyres. For the past five years, they’ve used information based off annual worldwide expeditions to populate a global model of trash in the ocean. During these research trips on the sea, dragging a fine net behind the boat for a few miles, and they discovered a confetti of small plastic particles dominating every sample.

“Plastic is non-biodegradable, made from fossil fuels from petro chemicals so it’s designed to last indefinitely,” Cummins said. “Plastic traveling around in those currents will break down and become more brittle and will fragment but it never completely dissolve.”

The team has documented roughly 633 species of fish impacted by plastic waste, including being found in the circulatory systems of muscles and clams and even plankton. This is when it starts to impact human life because the particles of plastic waste act as sponges for toxins.

“There are many different contaminants that make their ways into the ocean from industry, agriculture,” Cummins said, and “these contaminants don’t mix with water, but they will stick to plastic at high concentrations, up to a million times higher.

“One single particle of plastic the size of a grain of rice can have up to a million times higher concentration of chemicals like PCBs or DDT, pesticides, oil drops, [and] many different chemicals that make their way into the ocean and are being absorbed into this food web. We are at the top of that food chain.”

To make their research even more relevant to those who might not live near the ocean but instead a great body of water, they decided to sample the Great Lakes. It was in those lakes, specifically Lake Erie, that they found the highest concentration of plastic particles yet.

“One sample contained roughly 1,200 particles of plastic. We were pretty baffled by this sample. Many of these tiny little balls are the same perfectly round shape and size and under a microscope we figured out where these were coming from,” Cummins said.

Microbeads in scrubs and toothpastes wash down the drain but aren’t actually being captured by sewage treatment. About 38 tons pass into rivers, lakes, and ultimately oceans annually, where they then threaten marine ecosystems via the food web.

When 5 Gyres took their published findings to Proctor & Gamble, Johnson & Johnson, L’Oreal, the corporations agreed to slowly start phasing out the microbead products.

“But we wanted to take it one step further because we are far too small of an NGO to hold major multi-national corporations accountable,” Cummins said. “So we drafted a bill.”

They helped Assemblyman Richard Bloom (D-Santa Monica) author AB 888, which would set up the strongest protections in the country against the use of these unnecessary and toxic additives.

If passed by the State Senate before Sept. 11, AB 888 would prohibit, on and after Jan. 1, 2020, selling a personal care product containing intentionally added plastic microbeads that are used to exfoliate or cleanse in a rinse-off product.

Presented a grant to Orchestra Santa Monica, the music director and conductor Allen Gross, for $5,000 to purchase orchestra chairs and a conductor chair. They welcomed everyone to their fourth season at the Anne and Jerry Moss Theater at New Roads School.

Another grant was presented to Step Up on Second, with the CEO and Rotary member Todd Lipka accepting the $4,500 gift: “This money will go to support a security system and surveillance system at one of our permanent supportive housing called Michael’s Village.”

Lipka said the surveillance system would act as a helpful tool to monitor the individuals as they transition during the first year to living in a home.

“At Michael’s Village we have housed 34 individuals who are homeless or mentally ill; we literally took them off the streets and then moved them into housing,” he said. “They had a cumulative period of 300 years of homelessness amongst the 34 individuals.”

Visit www.5gyres.org/banthebead or download the Beat the Microbead app for more information about the harm of microbeads on the humans and the marine environment.