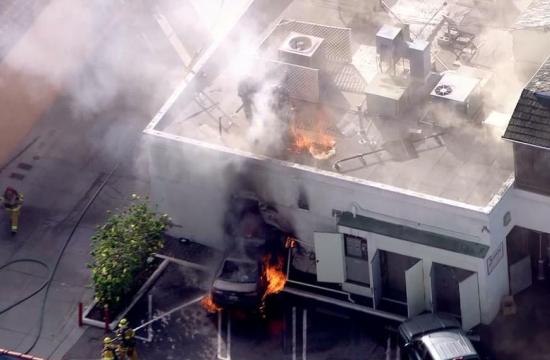 A Santa Monica building housing two eateries was damaged today by a fire that was sparked when a car crashed into the rear of the structure and sheared a natural gas line.

Firefighters sent to the 700 block of Montana Avenue about 8:30 a.m. extinguished the flames in about 45 minutes, according to the Santa Monica Fire Department.

A female employee of Cafe de Paris, who was in a restroom near where the car crashed into the building, was hit by some debris and taken to a hospital to be checked out, authorities said.

The vehicle sheared a 3/4-inch natural gas service line and damaged the meter, causing a leak, said Javier Mendoza of the Southern California Gas Co. Utility crews stopped the flow of gas about 10:25 a.m., and worked to make repairs, he said.

The cause of the crash was under investigation. The driver of the Toyota Camry that crashed into the building said she wasn’t sure what happened after backing out of a parking space.

“So I think when I put it in drive, something happened,” Yelena Zabokrititsky told NBC4. “It spinned out of control. I couldn’t control the car. I tried to hit the brakes and it just hit the wall. I went straight into that wall.”

— if there is damage that could result in a natural gas leak that might endanger life or cause property damage, call 911 after evacuating the area;

— do not turn electrical devices on or off, including light switches;

— do not start an engine or use any device, including a telephone, that could cause a spark; and

— do not attempt to control the leak or repair the damaged pipe or meter.