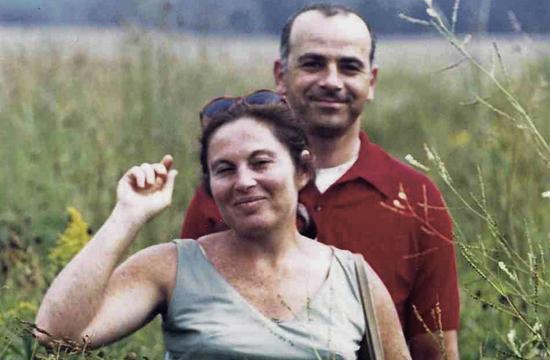 “The memorial for David will be an afternoon of shared memories, music, and poetry,” said Bruria Finkel wanting to invite everyone to the memorial for her late husband at The Broad Stage later this month on Sunday, Aug. 30.

David and Bruria’s 51-year marriage goes back to 1964. They were married on Pico Place in Santa Monica, where they lived. Bruria remembers that they invited about 400 people and almost 1,000 guests came. They created a table 100’ long and everyone who came brought food and drinks to share. The bowls and pans and trays the food came in were left behind as wedding presents.

They chose May 1 as their wedding day. An important day to David as May 1 is International Worker’s Day and commemorates the Chicago Haymarket Affair of 1886 and the labor union fight for an eight-hour workday.

And seeing that May Day is also an ancient European spring holiday there was a May Pole and dancing.

Bruria had moved to Pico Place, with her two young daughters, Melva and Wendy in 1959. Bruria describes Pico Place as an exciting and fun neighborhood.

They had hootenannies on the street. Bruria remembers Pete Seeger coming, Odetta coming.

Many musicians and artists lived there in the 1950’s and 60’s and Bruria was happy to be there, making art and raising her children.

But her life was about to change. David’s friend, Dr. Robert Peck, suggested to David that he call Bruria. Robert and David had been in the Army together during the Korean War. Both objected to the loyalty oath and were threatened with a dishonorable discharge. The case went to the Supreme Court and David got his honorable discharge. He went on to USC to study law. When he met Bruria he was working with Margolis and McTernan, a highly respected civil rights and civil liberties law firm in Los Angeles.

Bruria was planning to go back to Israel where her family still lived.

She hesitated about saying yes when David asked her out but thought to herself, “well, it’s only dinner.” They went to a party to celebrate the film “The Greatest Story Ever Told” because Bruria had cousins who were extras in the movie. After the party they went to the Ash Grove.

“I knew David was very special five minutes after I met him,” remembered Bruria. “I could see the character in the man.”

David came the next day to meet the children.

That evening they went dancing at the Miramar.

“Once I knew he liked the kids and the kids liked him I knew he was the one,” said Bruria. “Very generous and very wonderful and that didn’t change in 51 years.”

David came to live at Pico Place with Bruria and Wendy and Melva. After about six months he said, “let’s get married.” They did. Then Amy was born and then Adam. David would brag he was the father of four.

David decided to go out on his own and Sieroty and Neiman gave him a space in their law firm. Within a few months he had a good client list and he and Neil Herring, who will be speaking at the memorial on Aug. 30, opened an office together. They represented unions and conscientious objectors to the Vietnam War. David also worked for Civil Rights. In 1964 he went to Mississippi as part of a legal team investigating the Chaney, Schwerner, Goodman case. And, as always, they were both raising their four children.

“We were lucky to be able to borrow money from David’s father and we also had money from David’s work at Margolis and McTernan,” said Bruria. “So we could make the down payment on our house. We moved to Hill Street in 1966 and have lived here ever since. I had left Israel in 1953 and hadn’t been back. In 1968 I took Adam and Amy and went to visit with my family for an amazing three weeks. It was so good for the children to know their grandparents and cousins.”

David and Bruria and Adam and Amy went again to Israel but not until the time of Adam’s Bar Mitzvah.

“1976 was a hard time for us. I decided to request a grant. The CA Arts Council was giving grants under the Artists in the Schools Program,” said Bruria.

She was one of 24 artists to receive a grant.

“It was my first experience working in the schools,” she said. “I went to a Compton elementary school, Tibby Elementary. It was still a difficult time for Compton. We made the ‘Hop Scotch Map of the U.S.’ We asked, and the union made for us a 37’ cement circle. The flower of each State was painted on the circle. It was an important time for me and I became involved in ways I hadn’t before.”

In the 1980’s David ran for the Rent Board on the SMRR (Santa Monicans for Renters’ Rights) ticket.

In that same year he moved his law office to Santa Monica. It was the beginning of David’s political career in Santa Monica and he would go on to be elected to the City Council.

“I think, in general, the core of my existence has been the family, even though I have many other interests and David felt the same,” said Bruria. “Our interests were both different and similar. At the core was our family and we pursued our other interests with support from each other.

“In 1971 David and I went on a trip to England and France. When we travelled David always wanted to go to the courts and meet legal and political activists and I wanted to go to museums and see art. We decided one day would be mine and one day his. And it was interesting to learn that we were not bored with each other’s interests.

“It didn’t always work out the way we hoped but it was an important concept. It gave each of us respect for each other’s work and is a good way to be married.”

In 1990, after being on the Rent Board and the City Council, David ran for Municipal Court Judge.

The retiring judge, the man David replaced, was the judge who had married David and Bruria, Judge Jim Bianco.

“David very much liked being a judge and did that for 12 years,” Bruria said. “It was a wonderful gift given to him by the people of Santa Monica. As a sole practitioner and a lawyer for the unions we sometimes had hard times and his being a judge gave us stability and meant we could help our kids and our grandchildren and that was a blessing.

“At that time there was a mandatory retirement requirement at 70 and so after 12 years David retired.

“Serving the College with you has been a rich and rewarding experience for me,” Finkel wrote at the time of his resignation. “I thoroughly enjoy being a part of the college community for a number of reasons, not the least of which is that it is the most democratic and creative institution in Santa Monica and Malibu.” He still helped out as much as possible until his death on July 4 of 2015. He was 83.

“Losing David has been almost a three year process of his sickness but if I get to live long enough I expect the process of healing from the trauma of his death will probably come to be the work I do in the future,” said Bruria thinking aloud. “Already the outpouring of sympathy from our friends and from the community has been tonic to my heart.

“My children have been the sustenance of my life. They are thoughtful, careful, creative people. Having them near me is really important. Everyone of my children is a treasure as is everyone of my grandchildren.”

Thinking about her history and her future Bruria said, “The passing of time fascinates me – my personal life has always been expressed in my art. You could chart my life through my work. To actively deal with the immediate trauma I need time. Art takes time.”

Memorial For Judge David B. Finkel