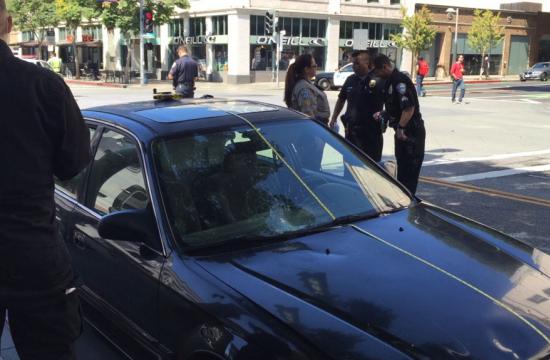 A 38-year-old woman visiting Santa Monica from England is back home recovering after being hit by a Honda that went through a red light and struck her on Thursday, Aug. 13.

Teacher Hannah Elridge was crossing the intersection of 2nd Street and Broadway just after 10 am on her way to Nordstrom when she said she was hit at by the car traveling at about 30 mph. She estimates the impact threw her across the street about 28 feet.

She said she was on her way to get breakfast before going surfing when the accident happened.

“I was taken to hospital with suspected major head injuries,” Elridge told The Mirror. “Amazingly there was no brain bleeding or broken bones. Everyone said that this was a miracle.”

Elridge said she was discharged later that day and flew back to England on Friday to be looked after by her family.

She said she wanted to thank a man by the name of Aaron who saw the accident happen and other passersby who helped, as well as Santa Monica police officers, fire fighters, and staff at UCLA Santa Monica.

“They saved my life and were all so kind,” she said.

The cause of the accident is still under investigation. Elridge said the driver had run a red light. The intersection was reopened to traffic at around 11:30 am Thursday.

Elridge said her three-week vacation was cut short by a week, adding she was on vacation by herself with no family or friends in U.S.