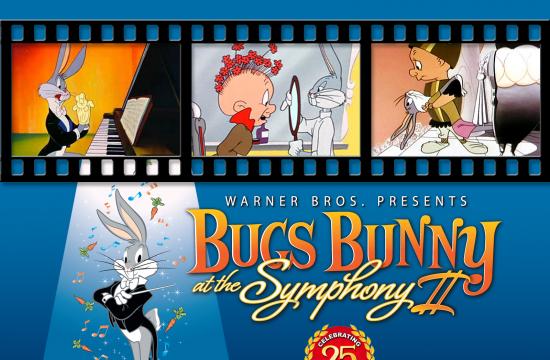 Performances will be held both nights at 8 pm at the iconic venue.

Fans will see and hear Warner Bros.’ greatest animated shorts, including What’s Opera, Doc?, The Rabbit of Seville and Zoom and Bored, as well as such surprises as the “live orchestra” premieres of Long-Haired Hare (set in the Hollywood Bowl itself) and the new 3D short “Rabid Rider.”

The Los Angeles Philharmonic will be led by Emmy Award-winning creator and conductor George Daugherty. He will lead the orchestra to play Carl Stalling’s astonishing, mercurial scores in synchronization to the iconic cartoons projected on the big screens.

To make the party complete, audience members will be treated to special Looney Tunes live attractions and photo opportunities as they enter the Hollywood Bowl.

Bugs Bunny at The Symphony and its predecessor Bugs Bunny On Broadway were pioneers in the development of the “film and orchestra concert” that is so popular today, and was the first touring concert of its kind.

The fact that this is still touring the world 25 years after its premiere, and has played to millions of audience members, is a huge testament to the fact that these cartoons and characters are beloved the world over, and have an indelible place in the hearts and lives of everybody who ever saw them and experienced them.

Stalling and Franklyn were unique in that, although the wrote music for cartoons, they did not compose “cartoony music.” Their music was on such a high level, plus the incredible performances of the Warner Bros. Studio Orchestra, that they achieved the perfect balance of not only be irresistible to general audiences, but to music connoisseurs as well.  This is one of the reasons that audiences not only love the concert, but the greatest symphony orchestras in the world love playing it.  And more people got their first exposure to classical music, thanks to Looney Tunes, Stalling, and Franklyn, than any other source in the world.

This weeks’ audiences will be delight to see that several of the cartoons are actually animated in a setting of the Hollywood Bowl — Long-Haired Hare, The Rabbit of Seville, Baton Bunny, and Tom and Jerry In The Hollywood Bowl.