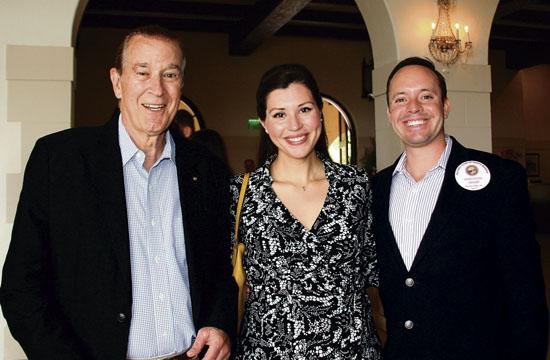 The Planet Mars is arguably the last frontier in space exploration (for now). When will we reach it? How will we get there? What will it take? And why do we want to go?

“The idea is that we want to take people from Earth and put them on Mars and not as a trip, not as a suicide mission, but actually colonize the planet,” said Adam Lichtl, PhD, former research director at SpaceX during his talk entitled “Blue Marble to Red Marble” to Santa Monica Rotarians Friday, Aug. 21.

Lichtl – who skipped high school and graduated from CalTech at 19 – recently left SpaceX to become a free agent in the rocket science world, but he shared some of the highlights he’s seen during his time at Elon Musk’s independent space launch company.

Headquartered in Hawthorne, Calif., SpaceX was founded in 2002 when Musk took his PayPal money and had a beer with Tom Mueller, “a legitimate rocket science,” said Lichtl. Though the government doesn’t fund SpaceX, it has government contracts with it – in fact, NASA is one of its customers.

“I feel that we’re at the beginning of this very interesting point in history where it may be another 100 years before this a done deal and people are on Mars,” Lichtl said.

What are some of the challenges of going to Mars? One is the distance.

“The international space station is 250 miles straight up. The moon is a quarter of a million miles. It took about three days for the Apollo astronauts to reach it. Mars is 140 million miles away. This is a very long trip,” he said.

You’re also chasing Mars as your aiming for it.

“Mars is moving, the earth is moving, so you actually have to time it just right,” he said. “It’s kind of like jumping from one moving car to another. And the other car is moving way faster.”

Lichtl said there are only certain times in the year you can go to Mars, approximately every two years is the window where the car is coming by you again.

Another challenge is supplies.

“You also want to take stuff with you. You need a nuclear reactor for power, heat, the ability to melt water, the ability to do electrolysis on the water to get oxygen out. You need, obviously, food,” he continued.

The next challenge is getting back to Earth. Right now, the rocket at SpaceX runs on highly refined kerosene and oxygen, but there is nowhere to fuel up on that on. Lichtl said one of the primary projects at SpaceX is to make a rocket that can run on methane, available to synthesize through Mars natural gases – that’s also how they plan on getting breathable air and drinkable water.

NASA estimates that they’d need to take roughly 300 tons of stuff to Mars in order to establish even a rudimentary settlement. Lichtl said SpaceX researchers have designed one of the world’s most advanced combustion simulations to digitally test new designs of what will be the most powerful rocket ever created.

“Because you don’t want a trial and error with things like this. What you want to do is design and understand it,” he said. “The idea here is to simulate turbulence to drive the efficiency of the engine. It’s an engineering challenge.”