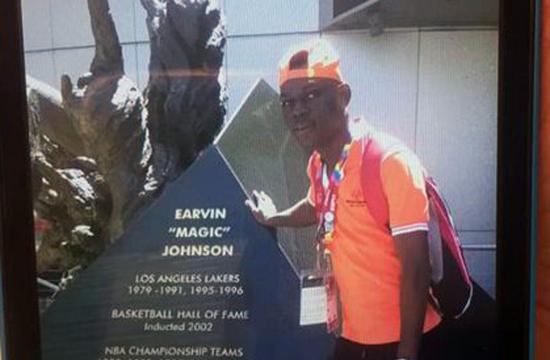 A Special Olympics athlete from the Ivory Coast went missing today at Los Angeles International Airport, prompting a search of the airport, restaurants, hotels and bus lines in and around LAX.

The athlete was identified by police as 15-year-old table-tennis player Shion Isimel, but he is listed in the Special Olympics program as Ange Ismael Kone. He was last seen on surveillance video at 5:57 a.m. at the intersection of Sepulveda and 96th Street, according to Airport Police Officer Rob Pedregon.

About 40 minutes earlier, he had been seen at the Delta Airlines ticketing counter in Terminal 5, Pedregon said.

The athlete, who speaks only French, is black, about 5 feet 8 inches tall and suffers from autism, according to Pedregon.

“He just wandered off by himself. We have surveillance video showing him walking away,” he said. “Our officers have searched the airport, all the restaurants in the airport, nearby hotels, restaurants and the bus lines.”

“Since Isimel suffers from autism we’re hoping he doubles back to one of those spots at some point,” Pedregon said. “We’ve also notified police in Inglewood and El Segundo and LAPD officers from Pacific Division are also helping us search for him.”

He was last seen wearing a black shirt, black pants and sunglasses.

“He was wearing an orange shirt that said Special Olympics, but it appeared to be a sweatshirt and he must have taken it off at some point, according to our last video images,” Pedregon said.

Isimel vanished hours after a 44-year-old Special Olympics athlete from Albania was found safe in Hayward, in the San Francisco Bay area, after disappearing Sunday from USC.