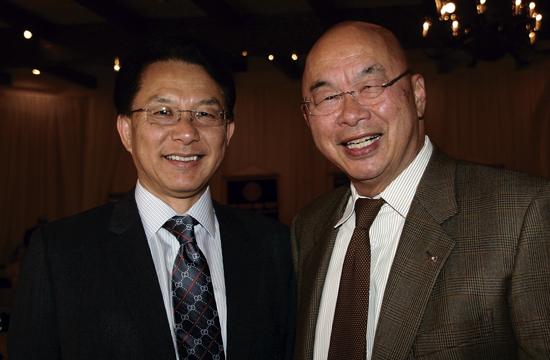 Imagine a cure-all type of device that zaps away brain disorders to undo years of trauma and other mental conditions that therapy could never dream of unraveling. Alzheimer’s, autism, anxiety, sleep and eating disorders, and addiction could all vanish within days.

His center uses magnetic resonance therapy, or MRT – a procedure that pulses energy from magnetic coils into the cortex to realign and synchronize the firing of neurons in each patient’s brain depending on the condition.

People with Alzheimer’s, anxiety, sleep and eating disorders, addiction and tinnitus have gone under the coils that emit the magnetic fields (it looks like one of those huge hand-held personal massagers from Brookstone.)

Approved by the Food and Drug Administration in 2008 for drug-resistant major depression, the magnetic procedure has treated and even cured people all over the world from their six global locations.

In the beginning of their talk, Dr. Jin and his associate opted to show rather than tell of their success-stories through videos: an seizure-riddled girl with autism who had seizures reduced to one a day and “normal” behavior; a soldier, shot in the head in Afghanistan and paralyzed on his left side, was able to make a fist with his left hand and move his left foot within months; and a seven-month comatose Taiwanese teenager who awoke after 10 days of MRT.

Two months later, the teenager could stand on his own, three months later he was walking, and even when they ended treatment, his recovery continued.

When Warren returned from Iraq, he had posttraumatic stress and self-medicated with alcohol, pills, weed, and other self-destructive behavior.

He was wracked with guilt and suffering a failed attempt to rescue his best friend who nearly burned to death after their Humvee hit a roadside bomb in 2006 – it would be his worst memory from the war.

As a result of the L.A. Times following him and doing a longform feature on his struggles, the Brain Treatment Center reached out to offer their help.

Warren was was interested in it from a physiological standpoint. Dr. Jin looked at your brain rather than ask you how you’re feeling, he said.

Dr. Jin and everyone else at the Brain Treatment Center didn’t care about his past or his emotions. They just wanted to look at his brain.

From a look at Warren’s EEG, Dr. Jin was able to describe his every conditions.

“He told me that I had severe anxiety issues, depression, substance abuse issues. He goes on to tell me that when I was younger I was strong in education and a straight-A student.

He told me I was good at math, and I was. He told me I should play piano, and I said I do. The very last thing he said to me was, can you read a book right now? And I told him no, but I never told anyone that, ever. It took too much effort and couldn’t follow along,” Warren said. “When I saw these things and saw what my brain was doing, it was very freeing in a sense.”

One session of MRT did what seven years of therapy couldn’t do for Warren. After one session he slept for eight hours straight, something he hadn’t done in years. Two weeks later a switch went off. He didn’t want to bingedrink or pop pills or smoke weed.

“In that moment what I felt was just peaceful. My mind wasn’t racing. I wasn’t all in my head. I didn’t feel like my skin was going to fall off,” he said.

The Brain Treatment Center has helped hundreds of other veterans. It’s an important cause to them.

“While we’ve talked now, two veterans have all ready killed themselves. There are 22 suicides everyday,” Dr. Jin said in the middle of him explaining the science of MRT.

They hire 10 percent of the patients they’ve successfully treated.

“Veterans are the best employees,” he added.

But their work continues, and they need more funding and awareness about the benefits of MRT.

To learn more about the Brain Treatment Center, visit www.braintreatmentcenter.com.