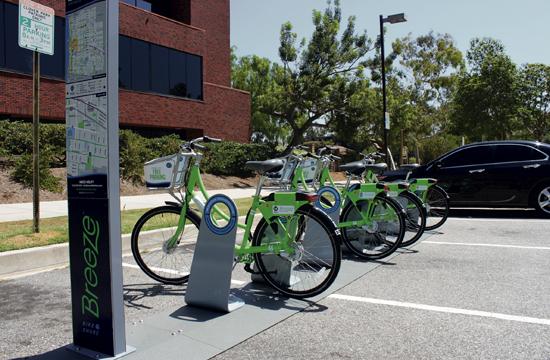 For bicyclists, getting around Santa Monica will be more of a breeze thanks to a new bike sharing program.

A full system launch is planned for early November with all 500 bikes spread across 75 locations citywide.

A small number of additional hubs are also planned in neighboring Venice.

“I think it’s a great idea,” said Kevin Rooney, a Santa Monica resident and longtime cyclist. “I’m from the U.K. and they started doing this in London. I just moved from New York and that city has got bike share set up there. It’s the first time I’ve seen this here in Los Angeles. I didn’t even know they were starting up the program.”

Modeled after successful bike share programs in other cities, Santa Monica’s system will provide 24/7 access to bikes around the city, with hubs located a short walk from commercial and residential areas to provide access to all.

Santa Monica’s Breeze Bike Share will be the first major bike share program to operate in the Los Angeles region. The program will give residents and visitors a new, affordable and fun way to breeze around town and connect to transit. “Smart Bike” technology will make it possible for users to bike anywhere in the city.

Rooney believes many people, including himself, can benefit from such a program.

“I think it’s a really good program,” Moya said. “I just returned from Denver and they have a bike rental program there. I can see this taking off in Santa Monica with the tourists. It’s a great way to see the city.”

A founding membership rate of $99 for a full year comes out to cost of less than $9 per month for bike sharing. There is also a student pass for $47, a monthly pass for $20, or a $6 per hour pay as you go.

The bike hub stations are set up throughout Santa Monica.

“I’m an avid cyclist,” Rooney said. “Anything to stop from driving everywhere is great. It will get more people out of their cars and off the road. The more people that ride bikes, the more the drivers in L.A. will respect them and share the roads.”

Rooney said that while there seems to be a mutual respect between drivers and cyclists in London, “I think L.A. drivers are still a little bit wary of cyclists. In Los Angeles things tend to favor the car drivers. But it’s still safe in L.A. as long as you can handle a bike and as long as you’re comfortable on a bike.”

Added Moya: “I ride a bike in the streets and I’m aware of what’s going on around me. I try and make myself more visible with brightly colored clothing. I understand that I’m vulnerable, but I don’t feel unsafe.”

“This new bike share system will make it easy to hop a bike for a quick one-way trip on the spur of the moment, and then grab another bike whenever you’re ready,” McKeown said. “Breeze will be a big part of our overall sustainable strategy. It will be fun, and we expect it will be a popular success with Santa Monicans and visitors alike.”

For more information check out breezebikeshare.com.