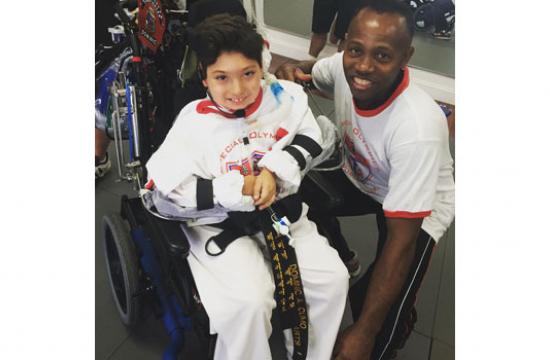 The 2015 Special Olympics are gone, but the volunteer work of the largest sporting event in Los Angeles since 1984 lives on in the streets of the city. One of Santa Monica’s own local fitness experts is happy to report he had a hand in changing the lives of some choice athletes.

“They stayed the whole time,” King recalled. “They’re nice people. Doesn’t matter how they are, how they communicate or appear, they’re people just like us.”

King was amazed by the dedication and energy of every athlete. Plus, it was just a lot of fun getting to know the athletes and watch them enjoy the sport. They did Taekwondo, broke boards, ran, and practiced weapons, forms, and kicks. They rehearsed this for hours on hours.

“One of the guys jumped up, flew in the air, and broke two boards” in one fell swoop, King said with an enormous smile. They did all of this “to get them ready for Monday, and they preformed beautifully.”

King credited the American Taekwondo Association (ATA) for their heavy and longtime involvement with helping showcase the talents of athletes with special abilities from all over the United States. Throughout the year, the ATA partners with local ATA-certified Taekwondo studios to help train and mentor athletes with disabilities.

Athletes ranging from 4 to 44-years-old participated in the 2015 Special Olympics World Games during ATA’s free-to-the-public Unified Demo at UCLA’s Wilson Plaza on Monday, July 27. This demonstration was a highlight of Special Olympics International’s pilot program for Taekwondo. The organization hopes Taekwondo will be accepted as an official Special Olympics sport.

Martial Arts is fairly new to the Special Olympics, having just been inaugurated into the program in 2009 and is currently listed as a “Prohibited Sport” for its at-risk exposure to injury.

Since its founding in 1969, ATA has helped to encourage personal victory with an organized belt ranking system that inspires students to always strive to achieve more.

“We recognize helping people to create leaders one black belt at a time,” King said. “We want to help. We want to do more.”

King has traveled to Little Rock, Arkansas, where the ATA is headquartered, over the years to sit on the panel of judges for competitions among athletes with disabilities.

Within the ATA, “we specialize with all different levels of people,” and that includes people who have mental or physical disabilities,” King said.

King stressed the importance of supporting athletes of all abilities.

“We cannot let them fall behind. They are just like us and everybody else,” he said.

They are athletes who start training at six in the morning just like any other Olympian.

“They preform just like everybody else. And we have to be able to help them as well.”

In its 47-year history, the Special Olympics’ global reach has expanded to 4.4 million athletes and given individuals with intellectual disabilities the opportunity to participate in their communities and to develop self-confidence and belief in them.

Support those who support others. PK Wellness is known for their fitness Taekwondo training and diet consultations paired with its state-of-the-art programs, including the ultra-popular i-Lipo. The PK Wellness gym hosts marital arts, weapons training, and TRX. But the civic-minded Master Trainer also created a Karate for Kids program that helps children build confidence and enhance physical strength and dexterity.

PK Wellness is now offering a back-to-school deal where Taekwondo is only $49 for a month plus a free uniform.

See what PK Wellness is all about at 2110 Wilshire Blvd., Santa Monica.