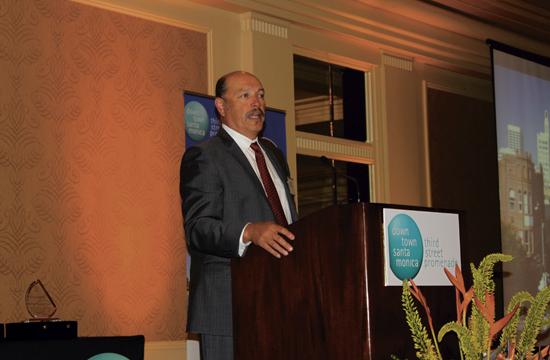 It was a time for downtown Santa Monica to shine and show off everything it has to offer during the annual Downtown Santa Monica, Inc. (DTSM) meeting at the Fairmont Miramar Hotel on Thursday. City leaders, law enforcement, and members of the downtown business community were at the large breakfast event that was held in the main dining room.

Tony Vazquez, the mayor pro tem of Santa Monica, led off the event and stated: “I’m just amazed at how much growth is happening in the city with small businesses taking off.”

He pledged his support to downtown businesses to help them grow. He also touched on other subjects such as minimizing traffic downtown to “create a better flow in the downtown area,” and the homeless situation that has risen since last year.

“Our downtown has become an iconic destination,” Cole said. “It’s a roaring success. The downtown is the civic and cultural heart of Santa Monica.”

Cole talked about the popular dining and retail sales businesses, which helped the downtown area eclipse more than $1 billion of taxable sales.

“Downtown Santa Monica has emerged as a genuine economic powerhouse,” Cole stated. He added that Santa Monica needs to continue to look to the future.

“In today’s world no one can take success for granted. The soul of the downtown is what will bring people back.”

A new form of transportation, the Expo Light Rail Line, will bring even more people to Santa Monica in early 2016.

“The completion of the Expo Line is a game changer,” Cole proclaimed. “It’s the biggest thing to happen to Santa Monica since 1965. It will change the way we think of how to get around.”

Along with the Big Blue Bus, light rail will give people alternatives to driving cars.

“In the long run we can provide solutions to travel,” Cole stated.

Cole also highlighted other assets of downtown Santa Monica, such as the Farmer’s Market, the public library, nice parks, and the Winter Ice Rink.

Kathleen Rawson, the CEO of Downtown Santa Monica Inc., continued the high praise through a video presentation that highlighted the unsung work of local volunteers. Rawson also talked about the importance of tourism, looking to the future, and the “Downtown Specific Plan.”