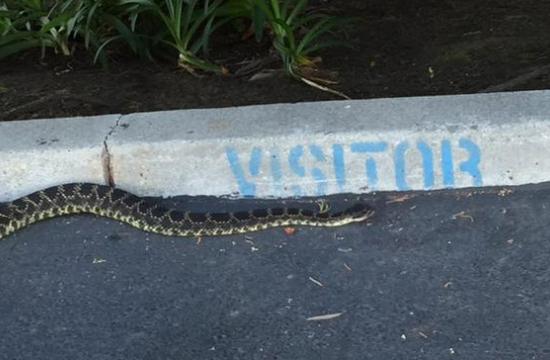 The snake was discovered in the parking lot in front of a curb marked “visitors,” Smith said.

Deputies had attempted to confine the rattlesnake while awaiting the arrival of animal control.

During the encounter the deputies were able to briefly confine the rattlesnake, but it escaped and began to quickly move towards the Marina bicycle path which was heavily populated with bicyclists, pedestrians walking their dogs, as well as mothers walking with their children.

The deputies identified the immediate threat to the public and became concerned for the safety of the residents and visitors on the bicycle path.

The rattlesnake, according to animal control, carried enough venom to cause death to several large adults. It is believed that the rattlesnake may have migrated from the Ballona Wetlands.