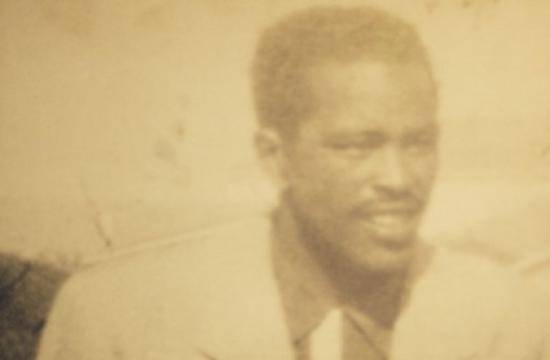 A Rosary was held in the honor of Marcus Ramos on the evening of Tuesday July 28, followed by a Wednesday morning funeral mass. Several hundred family, friends and St. Anne’s (Santa Monica) parishioners gathered to say goodbye to their beloved “Gunga”, as he was widely known throughout the parish. He passed away on July 16, 2015.

Rev. Chris Onyenobi led the service that was celebrated at St. Anne’s Shrine.

Ironically, most of the attendees interviewed after the service were unaware of Ramos’ actual name. He was simply known around the parish for years as ‘Gunga’.

A former neighbor of Ramos’, from 17th Street in Santa Monica, Amos Gonzalez, 91, knew Ramos since he was 6 years old.

“He got his nickname (Gunga) from the movie “Gunga Din” (which was released in 1939) and the name stuck ever since,” Gonzalez said. “He was a very nice man and everybody loved him. He was (former St. Anne’s pastor) Monsignor Wood’s sidekick. Whatever Monsignor Wood needed help with any task around the church or school, he called on Gunga to help out and he never let him down.”

Ramos was the youngest of four boys. Trinidad, Andrew, and Sammy were his older siblings. In the early 1930’s, accordingly to Gonzalez, ‘Gunga’s father owned horses and people would come to his house and would hire Gunga’s father to plow their fields using his horses. His dad was a hard working man.’

Ramos was born in Santa Monica in 1927 and attended elementary school at St. Anne’s. He played sports and served as an altar boy at St. Anne’s during his youth and accordingly to friends he graduated around 1941 from the school. Ramos remained single for many years until he married his wife, Nancy, years later. They did not have any children of their own together.

However, helping young kids was Ramos’ passion. He was active in all sports as a schoolboy and started coaching even before he graduated from St. Anne’s in the early 1940’s.

Ramos would hold the post of coach for nearly 70 years at St. Anne’s and he never accepted a penny for his services.

“Dedication is the word I think of when I think of Gunga,” said St. Anne parishioner Andy Macias. “He was very knowledgeable and he coached every sport. We didn’t know his age and he never told us his nationality, but we loved all the same. He was a good man and he was friendly with all of the students. Everyone knew him and you would never walk by him when you wouldn’t yell out, ‘hey Gunga.’”.

“If you know anything about St. Anne’s parish, then you knew about Gunga,” said Tudi Guajardo, a long time friend of Ramos’. “He did everything around the church and school, from trimming trees to ushering at mass to helping set up for the festivals and the Novenas to duties as a coach. We have a whole classroom full of CYO trophies that we won thanks to Gunga. He was a wonderful man and I knew him my whole life”.

Ramos spent nearly 50 years working at the St. Monica’s Cemetery before retiring but continued coaching at St. Anne’s until about 2007, completing nearly seven decades of volunteer service to the parish.

“He was my coach when I was a little girl,” said Maria Verduzco-Smith, 78. “He coached basketball, baseball, volleyball and soccer and he did it for the boys and the girls.”

Vince Garcia, 85, said Gunga had a unique way of handling disputes among the boys.

“He even set up a boxing ring, so the boys could settle their differences,” Garcia said. “Instead of fighting in the school yard, he’d let us settle them in the ring. He made a sport out of it and it was a lot of fun.”

“He made us work but he inspired us,” said Manuela Verduzco. “He was full of energy.”

“He always had a friendly smile on his face and he was well loved by this community,” said Onyeobi, who has been at St. Anne’s for the past 21 years. “Gunga had a big heart, touches many lives here and I will miss his seeing him every Sunday at mass.”

“He was a quiet and humble man,” said JJ Goldbrick, a St. Anne’s parishioner. “He led a simple life but he always had a smile and a nice word for you.”