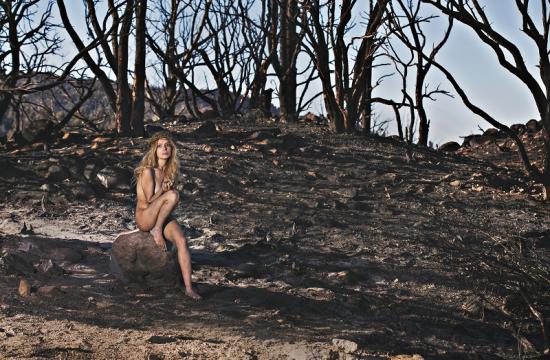 Big Bear recently experienced one of the worst forest fires in its history, with over 31,000 acres burned along the eastern flank of the San Bernadino Mountains. Luckily, there was no loss of life, but in the words of Nick Bruinsma, Public Information Officer for Big Bear Fire, recovery of the forest will last “beyond my time.”

But Bruinsma saw opportunity knocking recently, a chance to create some good from the devastation. Santa Monica-based actress Marie Paquim, who was in the Palm d’or winning film “The Convent” with John Malkovich and Catherine Deneuve, and has another film “Land of the Free, Except for Me” on the way, had the inspiration to show the after effects of the fire, and by so doing inspire not only awareness for our environment, but better treatment of our fellow human beings and animals.

Paquim, originally a child star in Europe, disappeared from the film industry for three years just after receiving her Master’s degree from Sorbonne University in Paris. She was a victim of human trafficking, and was held in captivity in a Los Angeles basement. She barely escaped from her sociopathic captor alive. After resurrecting her career, she was inspired to tell her story. The burn site off Highway 38 seemed the perfect backdrop to communicate, through images, what it means to lose everything, but also the inspiration for overcoming our fears and obstacles, to make a change. She decided to bring along her foster dog, Madeline, who was rescued before being euthanized at one of LA’s notorious animal shelters – LA has the highest kill rate for dogs in the country at 500 a day. Thanks to the charity Ace of Hearts, Paquim had a friendly “puppy face” to model with her.

Several connecting calls from the US Forest finally led Paquim to Bruinsma, who in perfect gentlemanly fashion gave real-time directions via cell phone, past every twisty turn, to a safe area with a panoramic view of the burn site. He later stopped by to visit Paquim, along with famed fashion and celebrity photographer James Hickey and his crew. Of course he had to first make a stop to give blood. Bruinsma says simply, “I like to help people.”

As Public Information Officer, Bruinsma’s job is to inform the public, to make sure people “don’t play with the matches.” It should also be noted that trash such as empty plastic water bottles can also cause fire, so littering adds to the hazard.

Actress Marie Paquim’s job description, she says, is “story teller”. Says Paquim: “When we rape the land, we cause climate change and drought. If we don’t protect our children, they can fall into human trafficking. And as Ghandi once said, ‘The greatness of a nation can be judged by the way its animals are treated’. So I’m here to warn people about what’s showing in these photos: Help the earth and the people on it, don’t leave it to be burned.”

Madeline, a docile white bull terrier mix with floppy black ears, revels in the dusty ground. She’s the perfect model, relaxing in the graceful hold of Paquim, who looks down at her with loving concern, pathos, expressing the death of the forest behind her, and much more. It’s like shooting a movie in a still photograph.

“I’m actually a terrible model,” jokes Paquim. “I keep forgetting to hold myself up straighter. But I feel so relaxed in my character, I forget to do it!”

James Hickey, a veteran fashion and celebrity photographer is on the same page as Paquim, and together they feel out different scenarios. He barks instructions while taking rapid-fire shots, capturing each moment. One assistant keeps tabs on every shot from a laptop, while another holds a light reflector, and the makeup artist is always close by for touch ups.

Paquim’s movie will be shot this Fall in Utah and be released in 2016. As an independent film with a message, getting the word out ahead of time helps ensure success. In this case, it’s literally about rising from the ashes. It’s a message that applies both close to home, and in this case around the world.

“I’m a doer,” says Paquim. “My goal has always been to tell my story not just to a few, but the whole world. And with the people we’ve got on board now, I know it’s going to happen.” True to her word, Paquim has already added world-class film industry veterans to the project, including director Andrzej Bartkowiak. Bartkowiak began his career working with luminaries like Jack Nicolson and Barbara Streisand and in Oscar winning films like Ordinary People and Prizzi’s Honor, then onto films like “Speed” and “Devil’s Advocate” with Keanu Reeves, and “Romeo Must Die” with action star Jet Li. Based on her participation and her groundbreaking script, Paquim also got a promise of distribution from Archstone and P&A from Midnight Oil, the same company that advertised blockbusters like the Transformer movie series and Spiderman. No small feat for a female actress/writer/producer, especially one who escaped the dark reality of human trafficking. Producers on the project are John J. Kelly, who executive produced “Divergent”, and Ivo Felt, who produced the Oscar and Golden Globe nominated for best foreign film this year, “Tangerines”. The cinematographer is Steven Fierberg.

So Big Bear’s recent fire can serve as an inspiration to us all, that we can all overcome tragedy, and turn a negative into a positive. All it takes is a little will power.

For more information on Ace of Hearts, visit www.aceofheartsdogs.com.