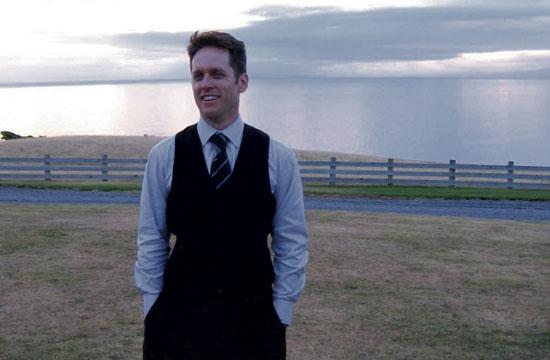 “Windswept” stars Padma Mehta, a long-time labor organizer who is on the verge of making the deal of her life when it all falls apart. Now, she has to rely on the neighborhood scam artist and a handful of stowaways to save her city, her planet, and Occupied Space – all before Happy Hour.

An untitled sequel is on track to be published sometime in 2016.

As for future writing plans?

“It’s one thing to talk about one’s plans but it’s another to actually get it done,” Rakunas laughs. However, he has ideas up his sleeve that will written in the future.

Rakunas said his writing process is simple: sit down and write. By treating it like any other job, he hopes to get consistent work done.

“Writing for inspiration can be unreliable,” he said.

The amount of time it took for him to finish the first draft of “Windswept” was about two years. Editing and polishing his work from editors and the publishing added extra time. His daughter was born during the process of writing “Windswept,” which made finding a consistent writing schedule challenging, but ultimately something he could and did accomplish.

Inspiration for the novel came at an interesting place: a bar at a wedding reception in Waikiki. He thought about where all the people who attended came from, and the people’s backstories. This train of thought created about a creative mindspace. In that moment, he wrote what would eventually be the first scene to his novel.

The novel is primarily fantasy-based, with science-fiction elements.

Rakunas was drawn to that particular genre because that is what he grew up reading.

He went on to talk about how the rules of fantasy and science fiction don’t necessarily need to adhere to the rules of reality. The genre lends itself to having plenty of room for freedom of imagination. Limitations only exist by the rules a writer creates.

However, the lack of adhering to a known realistic structure does not mean a lack of profound thought.

For more information about Adam Rakunas and his writing, visit www.giro.org. Follow the author on Twitter: @rakdaddy