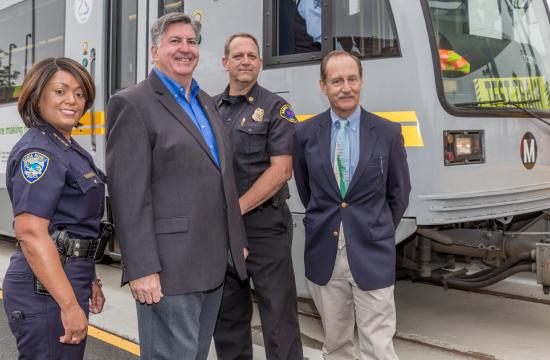 The first active rail tests of the long-awaited Expo Line from Culver City to Santa Monica have finally begun. These early evaluations of the Overhead Catenary System, which powers the trains, crossing gates, and traffic signals, represent key milestones on the path to completion slated for spring 2016.

On Friday, City officials came together in shared anticipation to discuss preparation efforts as an energized train was conducted along the rail corridor from the 17th Street Station to the Downtown Santa Monica Station.

“This train heralds a new age of mobility for residents and visitors alike, bringing benefits many of us have worked decades to achieve,” said Mayor Kevin McKeown. “Changes and challenges ride the rails, too, so along with anticipation comes preparation. The Chiefs, our City Manager, and the City Council will work together to assure safety, maximize mobility, and connect our community to regional rail as seamlessly and beneficially as possible.”

City Manager Rick Cole said this was the first train to enter Santa Monica in over six decades, the biggest and most significant transportation change since the opening of the 10 Freeway in 1965.

“Even if you never step foot on that platform you will still feel the impact of this massive public investment in new forms of mobility,” said Cole.  “The Expo line is not just a rail hub, it is the gateway to an emerging regional network that will allow hundreds of thousands of people to get around without ever putting keys into the ignition. We are actively working to minimize the adverse impacts of such a huge change and to ensure Santa Monicans directly benefit, focusing on the tangible things that mean the most to the community, including launching the Bike Share program, improving pedestrian connections near the stations and adjusting Big Blue Bus routes to take advantage of this historic opportunity.”

Interim Fire Chief Downs said a significant amount of change in Santa Monica will arrive with this train.

“The Fire Department’s first priority is to ensure that the residents, businesses and visitors remain safe,” said Downs.

Police Chief Seabrooks said there are a lot of moving parts here.

“The best thing we all can do for public safety is to know where and when to turn left and to always be cognizant of where bicyclists and pedestrians are on the road,” Seabrooks said. “Promoting rail safety is a shared responsibility.”

The Expo Line is the newest addition to LA County’s expanding network of regional rail. The 6.6 mile extension, which runs parallel to the I-10 Freeway from Culver City to Santa Monica, features seven new stations and 540 parking spaces in “park-and-ride” facilities.

The community is strongly encouraged to remain engaged as construction and testing continue and to be particularly aware while driving or walking near active rail.