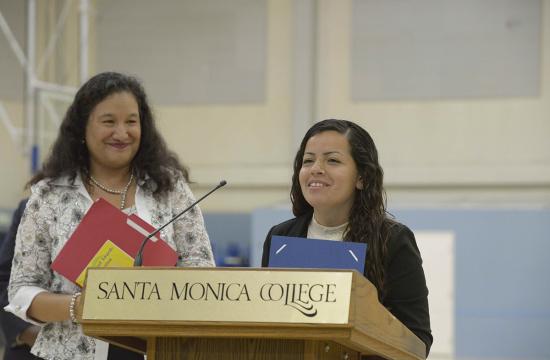 Imagine a place where you can walk in and talk to someone who knows what it’s like to be a first-generation college student, to have parents who are immigrants, and to carry their dreams on your back. That place exists. It’s at Santa Monica College, and it’s called the Latino Center.

“I feel like I belong,” says Marie Medina, a first-generation student at SMC. “Any time I felt like I was wasting my time in college, I went there and in an instant, they would help change my mind.”

Free tutoring in chemistry, English and math, counselors, workshops for students and their families, smaller classes through its special Adelante program with exceptional professors – the Latino Center provided Medina the network of support she needed to make it through college. A mother at 16, she survived an abusive relationship and came to SMC hoping to build a better life for her son.

“I related to it and it made me feel like I matter,” says Medina. Today, she is clear on her life’s purpose: to transform her experiences into an opportunity to help other teenagers. “SMC taught me that an education is about growing as a person…now I want to start making a difference.”

This spring, Medina found out that she was accepted into California State University, Long Beach – her top choice – where she will major in social work.

Maria Martinez is faculty leader for the Latino Center and the Adelante Program. 29 years ago, she started at SMC as a remedial math student. As the child of a maid and a crop-picker who came to the U.S. from Mexico, Maria remembers an SMC history professor who offered her extra help when he saw her struggling, and counselors who would not let her quit. She became the first college graduate in her family and returned to her alma mater after getting a Master’s Degree in Counseling to help students succeed at SMC and move forward to four-year universities. Today, SMC transfers more Latino students to the University of California system than any other community college.

Walter Ramirez is another first-generation college student at SMC who found it difficult to navigate college.

“I wasn’t very confident in my academic abilities, I had no motivation,” says Ramirez. “Just reaching out for help was a big challenge for me.” Class material related to the Latino experience made it easier for him to participate in class discussions. He finally mustered up courage to walk into the office of an SMC English professor, Kevin Menton, who became his mentor. This professor made the difference between him staying in college and quitting, says Ramirez.

SMC Communication Studies professor Amanda Whidden teaches a public speaking class for the Adelante program. She understands that there is often more than stage fright to keep students from being comfortable speaking out in a room full of people, and tries to create a safe, comfortable place where obstacles can be discussed and overcome.

“I see a true metamorphosis,” says Whidden. “I see students who start out in one spot and end in a completely different spot.”

Genesis Garcia is one such student.

“Professor Whidden was encouraging…and she made an effort to not to let our backgrounds interfere in our education,” says Garcia, who overcame her fear of public speaking. Garcia’s personal life story includes losing both parents by the age of 13, and ending up in an orphanage in Mexico for a year on a precarious journey from Guatemala to the U.S. to join her mother, who had immigrated earlier.

When a counselor asked her to write down her goals, Garcia wrote “UC Berkeley,” but only “as a joke”. The counselor helped her realize that her wildest dream was not far from reality. She will be majoring in sociology, beginning this fall – at UC Berkeley – and wants to be an immigration lawyer.

“Our goal is to help students get from the idea they have in their mind to where they want to be,” says John Quevedo, SMC math professor who teaches in the Adelante program.

The Latino Center is open to all students, irrespective of ethnicity. The Adelante classes – which offer material relevant to Latino culture where possible – are open to all students who have met the requirements of the Adelante program. Visit www.smc.edu/studentservices/latinocenter or call 310-434-4459 to find out more about the SMC Latino Center.

Santa Monica College is a California Community College accredited by the Accrediting Commission for Community and Junior Colleges (ACCJC) of the Western Association of Schools and Colleges (WASC). SMC is the leader in California’s 113 community college system in transfers to the University of California.