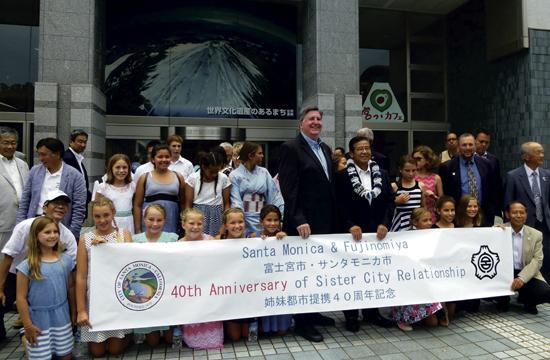 Forty years after Santa Monica established a sister relationship with Fujinomiya, mayor Kevin McKeown traveled to the Japanese city on the flanks of Mt. Fuji to celebrate the international friendship.

It was not only a goodwill mission but a chance for McKeown to take in some of amazing tourist sights such as Mt. Fuji, a spectacular waterfall, and a traditional Japanese ceremony as lanterns floated down the river.

“For me the highlight was making personal contact with people from another culture,” McKeown said. “Everybody was just so welcoming.”

On the special occasion, McKeown joined Fujinomiya mayor Hidetada Sudo in a section of Japan’s “Santa Monica Park” for the unveiling of twin friendship benches. In Santa Monica, meanwhile, there is a street called “Fujinomiya Douri.”

Later, more than 50 visitors from Santa Monica joined their Fujinomiya hosts for an anniversary banquet, where special presentations were made to Santa Monica Sister City Association president Jeff Jarow and former Santa Monica mayor Nat Trives, who initiated the sister bond in 1975.

After a ritual and toast, McKeown greeted past visitors from Fujinomiya to Santa Monica and told the host committee and mayor: “I have enjoyed meeting your students who visited Santa Monica. It is a strong and supportive community in Fujinomiya that has raised such excellent young people.”

Youngsters were a focus of the week’s festivities, as Santa Monica had sent an AYSO girls soccer team to participate in the Fujisan Cup soccer tournament held in Fujinomiya.

“We appreciate your hospitality as we celebrate together our 40th anniversary as sister cities,” McKeown continued in his speech to the host city. “We in Santa Monica value with gratitude the strong ties we have created in arts, sports, music, education, and cultural exchanges.”