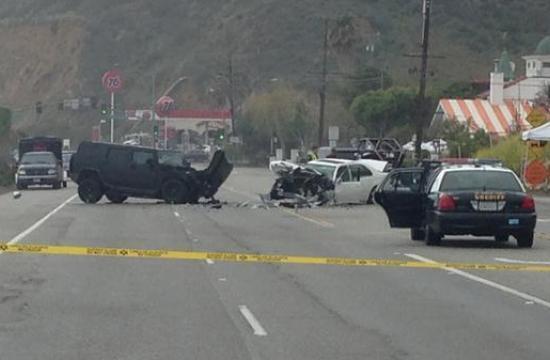 Los Angeles County Sheriff’s Department officials on Tuesday submitted their investigation of a fatal Malibu traffic crash involving Caitlyn Jenner to the District Attorney’s Office, which will determine if a criminal case is warranted.

Sheriff’s officials said last week their investigation determined that Jenner, then known as Bruce Jenner, was driving at an unsafe speed when the Feb. 7 collision occurred on Pacific Coast Highway near Corral Canyon Road. Sheriff’s officials said Jenner was not speeding, but was driving at an unsafe speed for the road conditions.

The investigation could potentially lead to a misdemeanor vehicular manslaughter charge, but prosecutors will have the final say on what charge, if any, is warranted.

Jenner, 65, was driving a Cadillac Escalade, hauling an off-road vehicle on a trailer. Shortly after the crash, authorities said it appeared that Howe’s Lexus had crashed into a black Toyota Prius whose driver had slowed or stopped for unknown reasons, prompting Jenner to rear-end the Lexus, pushing it into the path of the Hummer.

A sheriff’s official told the Los Angeles Times that Steindorff was driving on a suspended license at the time of the crash, and she could face a criminal charge.