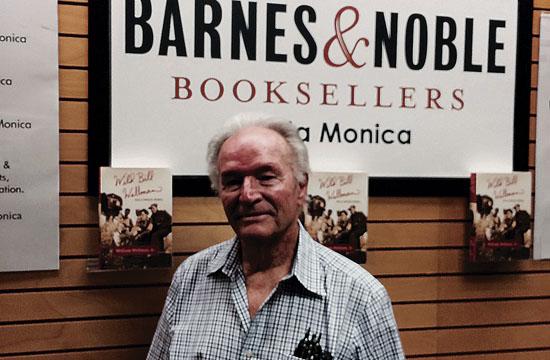 “I’ve been an actor for almost 60 years,” the 78-year-old California resident said. “I worked in 56 features. I’ve done more leads in bad movies than almost any actor who can still get a job.”

Wellman has currently gone from actor to author. His latest biography is a tribute to his late, great father and famed movie director, William Wellman, Sr.

Earlier this month, Wellman Jr. was the featured speaker at the Barnes & Noble bookstore in Santa Monica. He talked about his latest book called “Wild Bill Wellman: Hollywood Rebel” to a small local audience of film buffs.

“The book is about my father,” Wellman told The Mirror in an exclusive interview. “He was Wild Bill. The book took nine years to write but decades spent in research.”

Wellman related how his famous father went from a fighter pilot in World War I to getting his big break in Hollywood.

“My father ran into Douglas Fairbanks at a local theater and they started a friendship,” he said. “Fairbanks told my father, ‘That if you ever need a job come out to Hollywood and look me up.’”

Following the war, Wellman Sr. flew out to Hollywood and took Fairbanks up on his offer.

“My father had read in the newspaper that Fairbanks was having a big polo party. And my father flew up in his biplane, landed on the polo field in front of Fairbanks and Mary Pickford, Charlie Chaplin and all the great Hollywood stars and told Fairbanks: ‘Remember me?’ So Fairbanks gave him a starring role in a western around 1919. And that’s how my father started in Hollywood.”

But Wellman Sr. quickly went from acting to directing. His first big claim to fame was the silent film “Wings,” which won the first Academy Award for Best Picture in 1939. From that point on “Wild Bill” was off and running. He went on to direct 76 movies and his films received 32 Academy Award nominations and won several Oscars.

“Wild Bill” worked on such well-known movies like “Public Enemy” starring James Cagney, “Call of the Wild” with Clark Gable and the original 1937 “A Star is Born” with Frederic March. He also directed famous movie stars of the day such as Barbra Stanwyck, Carol Lombard, Gary Cooper and John Wayne.

“He directed every kind of film,” Wellman Jr. recalled. “He loved the art of making movies.”

Apparently, that love carried over to the son as well. Wellman Jr. has played parts in a number of cult favorite films like “The Born Losers” with Billy Jack (1967), “It’s Alive” (1974), and beach party flicks of the 1960s.

A current resident of Sherman Oaks, Wellman Jr. enjoyed his time in Santa Monica speaking at the local bookstore to a room of other movie enthusiasts.