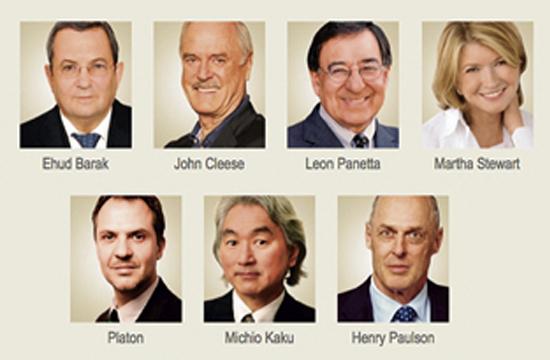 After 20 years of presenting world renowned and sought-after speakers to sold-out audiences, the Distinguished Speaker Series of Southern California is excited to announce its expansion to a fourth location, the Saban Theatre in Beverly Hills.

“For years, patrons on the Westside have been reaching out, asking us to bring our Series to their community,” said series co-owner Kathy Winterhalder. “We are delighted to have found the perfect home – the beautifully renovated Saban Theater. We are excited to present our compelling and bi-partisan style of entertainment to a new audience.”

With its season running from October 2015 to May 2016, on seven different Sunday evenings, the Distinguished Speaker Series will bring to the Westside some of the world’s most influential and captivating speakers.

“We search the globe to find great speakers whose remarkable leadership, accomplishments and opinions make a real difference,” said Winterhalder. “Never has that been truer than this coming season’s speakers,”

Ehud Barak, former Prime Minister of Israel, who continues to play a role in Middle East peace efforts will kick-off the series, (Oct. 18) followed by the award-winning actor of Monty Python fame, John Cleese, who  will have audiences laughing in their seats (Nov. 8).  Come 2016, former Secretary of the Treasury, Henry Paulson, will take the stage with lively conversation with “Fortune” magazine’s Geoffrey Colvin discussing the influence of China and the environment on our nation’s economy (Jan. 10).

Award-winning portrait photographer Platon will present a living history by taking our members behind-the-scenes with his subjects, some of the most powerful and influential visionaries from around the globe (Feb. 21). Theoretical physicist Michio Kaku, with his finger on the pulse of the future, will take patrons on a grand tour of what the future might hold for us, our children, and our grandchildren (March 13).  Former CIA Director and Secretary of Defense, Leon Panetta, will offer bold ideas and candid insights on U.S. intelligence, international security and the political challenges of the 21st Century (April 10). The season will conclude with lifestyle guru and successful entrepreneur Martha Stewart (May 8).

With every event concluding with a moderated question and answer session, the audience will have the opportunity to interact and exchange ideas with each speaker.

The Distinguished Speaker Series will be held at the Saban Theater, 8440 Wilshire Blvd., in Beverly Hills. Each program takes place on Sunday evenings at 6:30 pm.

The Series is open to the public in subscription packages only. Series tickets range from $343 in the balcony to premier seating at $700 for all seven evenings. Single tickets are not available.

The Distinguished Speaker Series was established in 1995 in response to Southern California’s need for an educational, entertainment alternative. The Distinguished Speaker Series is currently held at four locations, the historic 2,900 seat Pasadena Civic Auditorium (launched in 1995), the 1,500 seat Redondo Beach Performing Arts Center (launched in 1998), and the 1,800 seat Theatre, in the Bank of America, Thousand Oaks Performing Arts Center (launched in 2001). And now, the Art Deco style 1,900 seat Saban Theatre in Beverly Hills.

Winterhalder adds “we get so much inspiration from the game-changers we have brought to the stage. We have hosted over 100 luminaries who have transformed our world. These include leaders like Margaret Thatcher, the Dalai Lama, Bill Clinton, Steve Wozniak, and Tony Blair. We’ve laughed along with Betty White, Ron Howard, Bob Newhart, and Carl Reiner. And we’ve been moved by such talents as Yo-Yo Ma, Elie Wiesel, Robert Redford and Maya Angelou.”

Subscriptions may be purchased by visiting the Distinguished Speaker Series website www.speakersla.com or calling 310.546.6222.

Ehud Barak has served Israel as Prime Minister, Chief of General Staff of the Israeli Defense Forces and most recently as Minister of Defense, a position he took on in 2007. During his tenure as Israel’s 10th Prime Minister, Barak led the country out of a prolonged recession and into an economic boom, with 5.9 percent annual growth, record foreign investments, near zero inflation, a halved deficit and significantly decreased external debt. Mr. Barak played a pivotal role in various Middle Eastern peace efforts. “Foreign Policy” magazine named him 13th among its 100 Global Thinkers. The core of the Prime Minister, efforts was devoted to the peace process. In 2000, he ordered the withdrawal of the Israeli Defense Forces from South Lebanon, ending 18 tragic and bloody years of Israel’s presence there.

“The world’s funniest man” first made his mark as a member of the legendary Monty Python troupe in the 1960s, and has gone on to write, produce, direct and star in some of the greatest comedic hits of the last forty years, even receiving an Oscar nomination for best screenplay for “A Fish Called Wanda.” But John is far from your garden variety entertainer. From the beginning of his career he has continually parlayed his enormous talents into advancing the political causes he believes in; promoting education (a former Rector of the University of St. Andrews, he served as a professor-at-large at Cornell University from 1991 through 2006); and teaching business skills (the training videos created by his Video Arts production company are viewed by millions of people in the UK and abroad).

The Honorable Henry M. Paulson, Jr., served as 74th secretary of the U.S. Treasury (2006-2009), CEO of Goldman Sachs (1999-2006), and chairman of the Nature Conservancy (2004-2006). Paulson played a critical role in many events that have shaped our nation: as Treasury Secretary navigating one of the most tumultuous eras in U.S. economic history, Chairman/CEO of Goldman Sachs leading its unprecedented growth, and in the Pentagon and White House helping to end the Vietnam War. Paulson is one of the most prominent and powerful voices on today’s geo-economic landscape.  Since leaving Washington, Paulson has worked on bridging the gap between the U.S. and China through the Paulson Institute, which he describes as a “think and do” tank. His latest book is “Dealing with China.”

Geoff Colvin is an award-winning thinker, author, and broadcaster on today’s most significant trends in business. He is a longtime editor and columnist for “Fortune,” and anchor of “Wall Street Week” with “Fortune,” on PBS. He will lead a lively interview with Paulson.

You may not know the name of the man behind the camera, but you certainly know his work, stunning photographs of well-known celebrities and world figures, including 120 heads of state.  Featured in such prominent publications as “Rolling Stone,” “The New York Times,” “Vanity Fair,” “The New Yorker,” and 20 covers of “Time” Magazine, Platon Antonious has created more “portraits of power” than any other photographer.  He will share his behind-the-scenes experiences and intimate collaborations with his subjects as well as tell fascinating stories of his “visual interviews,” which are guaranteed to hold us spellbound.

A theoretical physicist with his finger on the pulse of the future, Michio Kaku will take us on a grand tour of what the future might hold for ourselves, our children and our grandchildren. Kaku combines his seminal work on string theory, an in-depth knowledge of how our brains function, and a thorough understanding of technology to predict some dramatic changes to our daily lives. Kaku appears frequently on CBS, Discovery, BBC and CNN, has been featured in the documentary, “Me & Isaac Newton” and the BBC’s recent series on time. He has written for many popular science publications including “Discover,” “Wired” and “New Scientist.”  The author of numerous international best sellers, Kaku’s latest is “The Future of the Mind.”

He has worked for both Democratic and Republican presidents and held some of the most prominent and important positions in the land while. As Secretary of Defense and Director of the Central Intelligence Agency under President Barak Obama, White House Chief of Staff and Director of the Office of Management and Budget under President Bill Clinton, Assistant Secretary of Health, Education and Welfare under President Richard Nixon, and democratic member of the House of Representatives for 16 years, Panetta clearly devoted his four decade career to the American people. He will share with us his candid insights on U.S. intelligence, defense and cyber security strategies, world affairs, and the global economic and political challenges of the 21st century.

She rose from being one of America’s first “It” girl ingénues to a successful entrepreneur, best-selling author, Emmy winning television show host and finally, founder of Martha Stewart Living Omnimedia Company. Millions of people worldwide rely on Martha Stewart for all aspects of everyday living – cooking, entertaining, gardening, home renovating, collecting, organizing, crafting, holidays, healthy living and pets. Her company reaches approximately 66 million consumers each month and her 8,500 products sell in thousands of retail locations, and its television and video programming, award-winning magazines, innovative websites and apps have broad reach.

Stewart has published 78 books and her television programming has won 18 Emmy awards.  She will share with us her thoughts and perspective – and a few surprises.