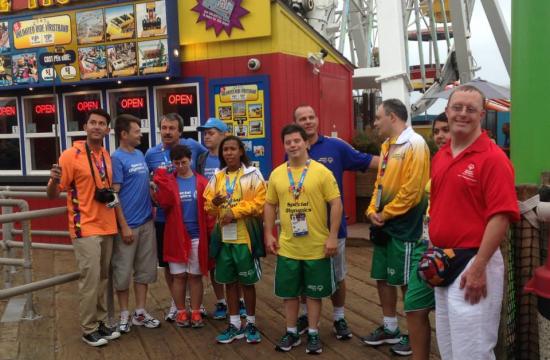 During the week prior to the July 25, 2015 Opening Ceremony, thousands of Special Olympic athletes arrived into Los Angeles from all corners of the globe to participate in the 2015 Special Olympic World Games, the largest event held in Los Angeles since the 1984 Olympic Games.

Santa Monica played a vital role in the occasion by hosting nearly 100 athletes from Brazil and Romania as part of the Special Olympics World Games Host Town program, during which time the athletes were given the opportunity to visit iconic Santa Monica locations while acclimating to Los Angeles in the critical days leading up to the Games.

During their time in Santa Monica, the inspiring athletes from the Romanian and Brazilian delegations were treated to a VIP welcome reception at the original Muscle Beach, an afternoon of beach and cultural activities at Annenberg Community Beach House, a beachfront barbeque at Perry’s on the Beach Café, a private event of rides and game play at Santa Monica Pier’s Pacific Park, and a finale farewell dinner at Le Meridien Delfina Santa Monica, amongst other activities.