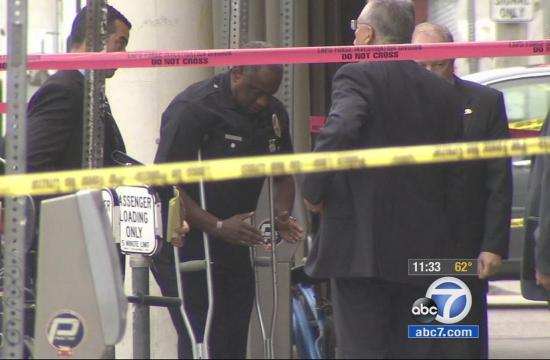 A man in his 20s was killed and two other people were wounded in a shooting attack at Venice Beach today.

Paramedics were dispatched at 2:10 a.m. to Rose Avenue and Ocean Front Walk, said Brian Humphrey of the Los Angeles Department.

Witnesses said someone fired several shots within a group of homeless people at the oceanfront park, a frequent sleeping place for those without shelter.

One man, in his 20s, was pronounced dead at the scene. His name was not released, but his friends revealed his nickname — ” Shakepeare” — and said he was a a peaceful man.

One other man was apparently shot in his leg, witnesses said. He and a third man were taken to hospitals.

The victim was among a large crowd of people in front of a hotel, when a fight broke out over who was camping where, according to witnesses who spoke off camera to television reporters,

Just after sunrise, Los Angeles police Sgt. Barry Montgomery told reporters “it appears now, at this time, that this incident was triggered by some sort of dispute among locals, which triggered this deadly attack.”

Blood was steam-cleaned from the popular tourist attraction, which was reopened for public use before 8 a.m.