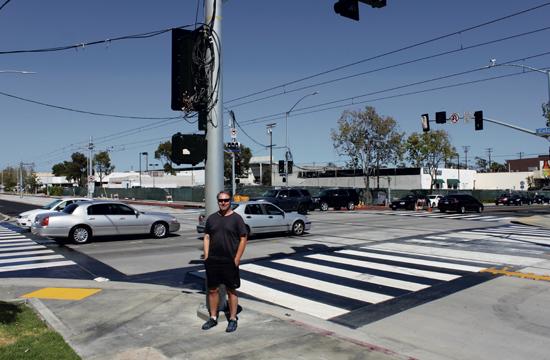 That seems to be the million-dollar question as Phase 2 of the Expo Light Rail Line project in Santa Monica is nearing its completion date next year. One local man feels strongly that there should be crossing gates implemented at the busy intersection of Colorado Avenue and Lincoln Boulevard.

“I heard that there aren’t going to be any crossing gates (at that intersection),” said Greg Mantell, an area resident who spends a lot of time in Santa Monica. “And then I started to think about all the problems that might cause. I hate to say it but I know there are going to be crashes. A train is big, and if a train hits a car it’s not a good situation. These are passenger trains and there are people on board. So it’s not just to prevent car accidents but also people on the train we should be concerned about.”

The second phase of the Expo Light Rail project will connect Santa Monica by rail to Culver City. Phase one connecting downtown Los Angeles and Culver City opened in June 2012. Major construction on the $1.5 billion phase two project began in late 2011 and is expected to be completed in early 2016.

Train safety tests have already begun as the line is about 90 percent complete.

“The complete Phase 2 extension is 6.6 miles and travels along Colorado Avenue in Santa Monica,” noted Gabriela Collins, the Community Relations Manager for Exposition Construction Authority in Los Angeles. “It basically goes down the center of Colorado Avenue. That section of Colorado is what we call running street mode. There are no crossing gates. The train has to act like a vehicle in terms of stopping for a red light and following the speed limits. This is not at all an unusual configuration throughout California and throughout the United States in most light rail projects.”

But Mantell isn’t convinced enough is being done to help prevent potential accidents.

“It’s poor planning,” he said. “Because I’m a fan of light rail I think if you don’t build it properly there will be problems. It’s not just about being theoretical. You have to look at the real world. We know that people are going to run red lights and hit the train, so what can we do to minimize that and prevent that from happening? You have to be proactive and not just reactive.”

According to Mantell, being proactive in this case would mean putting up crossing gates at busy light rail intersections such as the one at Colorado and Lincoln. But that hasn’t happened as of yet.

“Studies have shown that long-arm crossing gates are one of the most effective ways to prevent drivers from having to make a faulty choice about whether or not they need to stop,” Mantell pointed out.

Not that railroad crossing gates will solve everything.

“Even with the gates down drivers in vehicles will try and get through,” Mantell said. “But what are they going to do when there are no crossing gates?”

Flashing red lights will warn drivers to stop when a train passes through an intersection. But Mantell warns: “People are going to run those red lights. In Los Angeles, people run red lights all the time. And so what would you do about that? Well, one of the most basic things you can do is put in a crossing gate.”

Mantell said he has taken his concerns to city leaders.

“I emailed the city council,” he said. “I kind of blamed Santa Monica because I feel Santa Monica didn’t want crossing gates downtown because it would look ugly. They are saying that the Expo Line decided what the (street) devices would be. But I do think early on that Santa Monica let it be known they didn’t want a big aerial structure.”

Collins responded to Mantell’s concerns through an email reply, stating: “Light rail systems operate safely and efficiently in street-running mode in Los Angeles County (including Phase 1 and the Gold Line), as well as in the state of California and throughout the U.S.”

As for the possibility of red light cameras with photo enforcement, Mantell feels that could be one way to get drivers to stop at busy intersections. In his email letter to city leaders, Mantell stated: “The Berkley Study said that, in lieu of crossing gates, at the very least photo enforcement (red light cameras) are found to be an effective way to get cars to stop. Drivers will not stop for the train, but they will stop because they don’t want to get a ticket.”

Even so, Mantell knows that red light cameras wouldn’t solve everything.

“This is not just the case of a red light camera, but something to prevent people from being hit by a train,” he said.

And Mantell believes the best safety device is still crossing gates. He feels it’s not too late.

“They have an opportunity now,” Mantell said, referring to Santa Monica city leaders. “There’s still time to do something.”

If not, Mantell is afraid of what might happen down the road.

“I think the city of Santa Monica should be concerned,” he said. “Santa Monica is going to be impacted when there are crashes around here.”