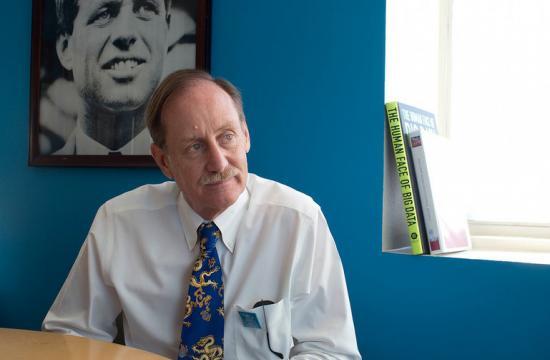 Santa Monica City Manager Rick Cole may have one of the most challenging city management positions in California, responsible for the day-to-day administration of the City of Santa Monica, which includes implementation of City Council ordinances and policies, oversight of 14 departments, and an annual budget of $564 million.

Before starting in the City’s top job on June 29 (replacing Rod Gould who retired in January), Cole was Deputy Mayor for Budget and Innovation for the City of Los Angeles, where he was responsible for a budget of $8.6 billion and oversaw five city departments with more than 3,000 staff. He also supervised L.A.’s Chief Sustainability, Technology and Data Officers.

Earlier in his career, Cole served 12 years on the Pasadena City Council and was Mayor when Pasadena adopted its landmark General Plan, an early model for smart growth.

How has the transition been so far?

Rick Cole: I’ve actually been energized, I deliberately chose to spend the first month at home fitting the organization so I’ve had the chance to touch a lot of pieces in Santa Monica in the last two and a half weeks, it’s been really fun.

Why did you decide to apply for the job?

It’s probably the most interesting challenge for a city manager in California. This city not only has extraordinary assets but extraordinary opportunities. Probably the most significant opportunity right at the moment is to find the right balance on issues of city development. Particularly the coming of the Expo Line – it’s a huge change for the city, probably equal to or greater than the coming of the 10 Freeway 60 years ago, or the Red Line 100 years ago. This is a really seminal moment. I have the privilege to be part of helping this community achieve both the preservation of what’s good about it, and what people cherish, as well as taking the opportunity to continue improvements. I think that’s a very accepted challenge that ultimately led me to choose to step away from the job I really loved, which was being deputy mayor of the city of Los Angeles.

Do you know how many candidates you beat out?

I actually don’t, except that it was a national search, and again it is one of the most sought after jobs in the world of city management, so I’m certain there were a great number of very qualified candidates.

Why do you think you stood out?

The council was unanimous, which I think indicates a couple of things, because sometimes people see the council as divided, particularly on development issues. I think one of the reasons the council selected me is because I spent the last 30 years grappling in Southern California with these development issues, including spending a lot of time paying attention to what’s been happening here in Santa Monica. So I think the council hopes, and I certainly hope, that I’ll help to find common ground on these divisive issues. And it’s not common ground as in a split-the-baby compromise, but it’s really listening to this side and their concerns, and listen to this side and their concerns, are there ways we can reconcile the concerns on either side. I think it’s possible. The other thing I really enjoy is civic engagement. For a lot of city managers, civic engagement is put up with so you can run the government. I have the opposite view: we’re here for the citizens, and so connecting with our citizen customers is I think the most important part of the job. I think my track record for that caused the council to think that the time is right to really engage with our citizens. It’s a very engaged citizenry, but right now there’s a pretty strong vocal narrative that the city hasn’t been listening. True, or not true, that perception has to be dealt with. I intend to engage with the citizens, and I’m going to enjoy it.

How would you describe the civic engagement here in Santa Monica, compared to where you’ve worked previously?

Well, I’ve worked in cities. I would prefer to say I’ve served really, because it has been more than just a job. I came to this because of my hometown involvement in Pasadena. Which, like Santa Monica, has a long legacy of deep civic engagement. I’ve also been a city manager in Azusa, which did not have a history of civic engagement. We helped spark a real renaissance by our efforts to reach out into the community. So civic engagement here in Santa Monica is both more intense, but a little bit narrower than it is some communities. There are some people that are extremely engaged, and there are some people who just sleep here. There are more people who just sleep here, and there are people who are extremely engaged than in most communities, but there’s a pretty sharp delineation between the two in the middle. But we do have some citizens who care passionately about the city – they give a tremendous amount of their time to non-profit organizations, civic volunteering, et cetera. And there are also some very political activists and advocates for specific causes. I think what everyone recognizes, with very few exceptions, is that it’s become a little more divisive and toxic in recent days. That’s not the first time – there have been times in the past in Santa Monica. That’s not healthy. And so I’m hoping the cycle is going to begin to turn by this council and me coming in as the City Manager, we’ll be able to lower the temperature of the dialogue, but continue to have a very strong dialogue.

With such a long history in local city government across the Southland, can you share what got you into this line of work?

Rick: Well sure. Again my hometown, I grew up in Pasadena, as a student, got swept up in the struggles of the times around school integration. And so, rather than just being a student who went to school, did my homework, and went off to college, I became involved in the efforts to bring social justice to a very segregated environment. Pasadena is a city of both very wealthy and very poor, and the schools that I grew up in were very segregated. As I become involved in that, it got me involved in local city government, which is something I didn’t ever expect to happen. I managed the campaign of my high school government teacher who ran for City Council and, to everyone’s surprise, he won the election. That inspired me to follow him onto the city council. And then I realized that I didn’t just love my hometown, I loved cities and making them work and making them work better. And that led to a career in the public sector.