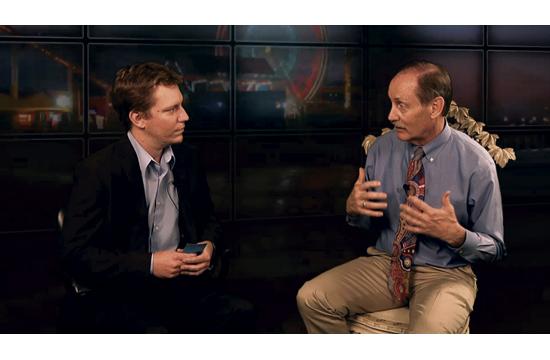 In last week’s edition of The Mirror, Cole answered questions about his transition, why he decided to apply for the job, civic engagement, and his career.

In this week’s part two, Cole answers questions on challenges he sees for Santa Monica and ongoing issues.

Santa Monica is a very evolving, changing place right now. What sort of short-term challenges do you see, and how do you think some of them could be addressed?

Rick Cole: Sure, there are a number of them. Probably more in Santa Monica, for a city of 92,000, than you would find in most Southern California cities – in fact, practically any of them. So mostly the adopting of the zoning code was one that we’ve sort of moved past, but now there are going to be a number of projects that are going to come forward.

There is a wide range of opinions and emotions about those projects, so that’s going to come up in the next several months. The airport issue is front and center, and we have, as of July 1, 2015, the expiration of the 1984 agreement. So what that means, and how quickly we’ll be able to make changes at the airport is going to be fought out in the courts and Congress. It’s already being fought out in the council chambers as people step forward and say “Why can’t you just shut the airport down right today?”

Not realistic, but I understand the passion given the impacts that it has on the surrounding community.

Next summer, there’s going to be a tremendous amount of people. We have to be prepared to mitigate those predictable negative consequences incoming, and we have to be able to get people to be familiar with utilizing it. This is going to be a great new asset for people, particularly young people, to get around, and for older people as well. So, there’s a lot of things that are going to be coming up.

And of course, it’s Santa Monica, so how we deal with the regulation of the medical marijuana dispensaries, that’s going to come. There’s going to be plenty to do. I’m trying to be strategic, because the city manager is the chief executive officer, so Igoing to try to focus not on what’s coming up this week, this month, this year, but over the next three to five years. Because things like the Expo Line, something 15 to 20 years in the making, we need to be thinking about the big things we need to be doing as a city that’ll pay off for us in five years, in 10 years, to increase the quality of life for our residents, and to increase the standard of living for our residents.

Let’s talk about development. How would you say Santa Monica’s evolved over the past couple of years, in terms of the amount of what’s been approved, particularly multi-use developments.

Well, certainly in a healthy economy this is going to be an issue that’s going to have more salience than in a downed economy. You can almost predict it. By the way, Santa Monica’s not alone – almost every community in Southern California has demand that has come back. We’re still growing and evolving as a city and as a people, despite all the gloom and doom of four or five years ago, people are actually excited about the Los Angeles region, they’re particularly excited about Santa Monica. It’s a very attractive community because of the positive things that have happened over the last few years. People want to come because we have good schools, good parks, we have the ocean, good weather, and a healthy economy. So, it’s natural that people are going to be concerned, and it’s natural, given the level of traffic in our community, and some of the other impacts of years of development here in Los Angeles surrounding us that people are going to be concerned. I am going to try and focus less on the abstract question of how much growth, which can get very emotional, because “No more growth, because we’re out of water” and “we need growth because we need jobs and we need to improve the quality of life.” I’d like to talk about the quality of growth, and the location of growth. I think that most Santa Monicans would agree that putting growth here is better than putting growth there. We might not all agree, and the here and there, there might be some differences of opinion, but a 10-story building in one place is a much better idea than a 10-story building in a different place. So we get focused sometimes on heights and issues like that. Let’s pick where we want to see growth, where it will actually enhance the communities it stands in. And then let’s also talk about the quality: are we producing affordable housing, are we producing local jobs, are we producing tax revenue that will allow us to improve our libraries and improve our parks and improve the schools? Or are we simply improving the bottom line of the developer? And then are we bringing the kind of growth that fits in with the vision that people have of Santa Monica, the city they have lived in, want to live in, for their future? I think those are important questions that haven’t been asked of developers and of the community, sharply enough, which is not how much, as much as it is, where do we want to see positive growth, and where don’t we want to see positive growth? Where don’t we want to see any kind of growth out of scale with the surroundings? And then, again, what are the qualities? How does the building meet the street? These are important issues that got neglected in the ‘70s and ‘80s, and even more recently.

How would you describe your leadership style when it comes to city department heads and staff? How do you think you’re going to approach this, because there’s been things that can’t be changed, how do you plan to approach that?

I think I bring a focus on two things that I view as bookends. You can see them as two different things, but I think they fit together. One is accountability, which, all by itself sounds punitive, but it really means, “Look, you have a job, you’re well paid in that job, you serve the public, and we’re expecting high standards and productive results.”

That’s accountability, and I think we ought to accept that here in Santa Monica because we are well compensated, and the people here really care about the work they do. I’ve found that tremendously true in the two and a half weeks I’ve been able to be around and talking with frontline workers, police officers, traffic enforcement officers, et cetera.

The other piece is empowerment. If we expect people to produce high quality results, we’ve got to let them do their job. And that means we don’t micromanage them. I don’t micromanage them, the council doesn’t micromanage them. We have to set parameters, but that doesn’t mean people are out of control, that’s where that accountability piece comes in. But let’s allow people to be creative, let’s allow them to be innovative, let’s allow them to think about new and different and better ways of doing things. And let’s encourage that kind of behavior. So, to me, you can pretty much sum up the way I manage with those two words. Let’s make people accountable, hold them accountable for producing results, but let’s empower them, because they really care about their job. Let’s trust them to do a good job, and let’s check up to make sure they have accountability.