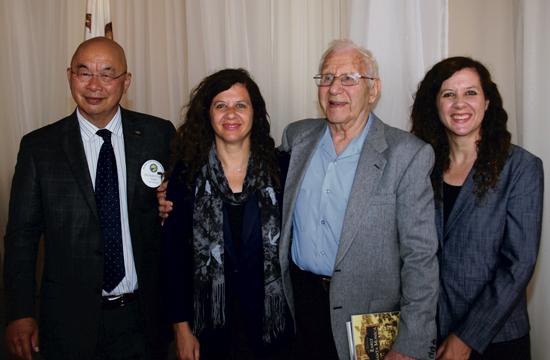 Santa Monica Rotarians didn’t just hear a first-hand account of the Holocaust on Friday, Aug. 7. They were transported to a young boy’s survival story inside a Nazi nightmare, which in turn translated into an entire generation’s story of resilience and humanity. Rotarians learned about the human capacity for suffering, determination, murder, and ultimately survival. One 88-year-old’s story was able to relay a lifetime of achievement and grit.

The audience was captivated by Dr. Avraham Perlmutter’s vivacious and unwavering depiction of escaping Nazi soldiers nearly 60 years ago. At the end of his talk, he received a standing ovation, a gesture previously unseen by this reporter. In between his oration one could hear audible gasps and “oh my god’s” from the audience. It was a story of a lifetime that gave Rotarians emotions and plots typically saved for the big screen

Perlmutter was just 10 years old when he saw Hitler come in to Vienna, Austria in 1938. He was Jewish and the invading German army was after him soon after they arrived.

“The very fact that I was a wild child actually helped me later on to survive,” Perlmutter said.

It was hard for his family to move anywhere in Europe because they were Jewish. But one of those countries that took them was Netherlands, where he had an aunt. So his parents put him on the Kindertransport (children’s train) and the ensuing war-torn years continued.

Many times, a number of nuns and priests helped Perlmutter in Jewish refugee camps.

He recounted one specific moment when German soldiers came looking for Perlmutter to take him to the Jewish Theatre in Amsterdam (and subsequently off to Auschwitz). He’ll never forget the sound of their boots, and he made the thumping sound on the ground as he told the story. They took him, along with the son of the family whom Perlmutter was staying with.

“Because I was a wild child, I was always planning to get out of there,” Perlmutter said.

So he escaped when two Nazi soldiers changed shifts. He tried to bring the family’s son with him, but he was too scared to come in fear of getting killed. Later, Perlmutter learned he died during the war.

After that, Perlmutter was in constant hiding. Fortunately, his sister, who was in a refugee camp, had sent someone to find him, give him a train ticket, and take him into hiding until they could be reunited again.

“In those days about 95 percent of the Dutch people were anti-Nazi, and a good many of them were actually hiding Jewish children. Before the war there lived about 180,000 Jews in the Netherlands and only about 30,000 survived. And the majority of them were hiden among non-Jews,” Perlmutter said.

His story was punctuated by multiple accounts of hearing those Nazi boots (thump-thump-thump), but each time Perlmutter squirreled away just in time. But every time, there was someone else picked up by the Nazis who died in the war.

He hid in dirt, under coal, under beds, and in closets. He ran from the Nazis, and he escaped their clutches. The wild child soon became a survivor.

Like the tailor, the farmer, and the priest, many of the people who helped Perlmutter along the way remained nameless.

“In those days you were not supposed to know names because if they ever caught you, you couldn’t tell the addresses or names of the people who were hiding you.”

Though he was eventually reunited with his sister, she was caught by the Nazis and taken to Auschwitz. But she survived as well.

“She lives now in Santa Monica, too,” Perlmutter said as the crowd clapped.

With the British soldiers arriving, Perlmutter was able to snag a ride to Tel Aviv, where his parents were. Upon the reunion, his father tried to conceal the sad fact that his mother had died two weeks before his arrival.

During his hidings he managed to get hold of various dictionaries. He taught himself English, French, and Spanish during the war. He realized his passion for knowledge.

He arrived at America with grants to quench his thirst for education. At 24, he graduated undergraduate college in three years. He still wanted to know more. So he received a PhD in aeronautic engineering and went on to become a successful businessman.

After the war, highlights of his life included fighting in the Israeli War of Independence, meeting Albert Einstein during his time attending Princeton University, and developing a stabilizer most cameras use today.

Perlmutter’s story focused on those who helped him rather than those trying to defeat him. His autobiography, the acclaimed book, “Determined,” recounted this miraculous journey from Nazi Europe all the way to Santa Monica, where he lives with his wife still today.