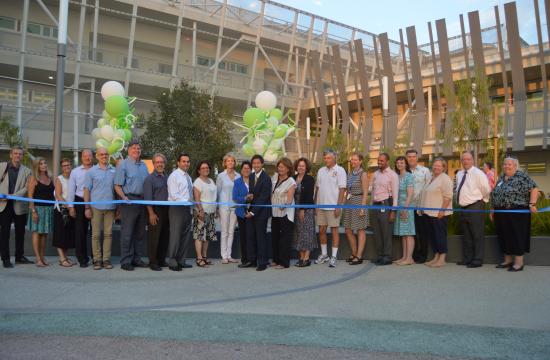 A ribbon-cutting ceremony was held on Thursday, Sept. 10 to welcome in the brand new Innovation Building at Santa Monica High School.

The three-story-high building cost $55 million and took several years to build and was part of a bond by voters in 2006 to update the Santa Monica and Malibu campuses. The building features 17 classrooms for math, English social studies, and language; 15 science labs; eight prep rooms; two special education classrooms; an auto shop and separate auto shop classroom; a Project Lead the Way computer lab; a science lab tech-chemical storage and work space; and six administrative offices. It also has state-of-the-art technology installed such as “smart boards” and new science labs and equipment.

“It’s part of an overall long-term plan for innovation at Santa Monica High School,” said Gail Pinsker, the community and public relations director for the local school district. “We are in the middle of installing a lot of technology at all of our schools. Santa Monica was in need of more facilities, and this is one of several projects that are planned in the near future. That building is going to predominantly include science, technology, engineering, and math classes.”

Pinsker went on to say that “all of our schools are strong in not only visual performing arts but also academically. In test results last week our students are performing above their peers in Los Angeles County and the state. So we have strong academics and really terrific athletic programs.”

Pinskers pointed out there are about 3,000 students at SMHS.

“Not every student will be able to use the facility,” she said. “But likely over time they’ll be able to enjoy the Innovation School at one point or another.”