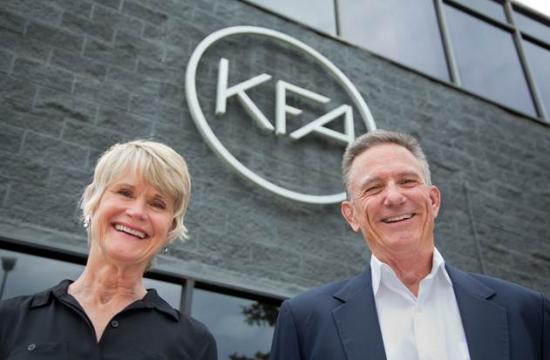 KFA (Killefer Flammang Architects) recently celebrated its 40th anniversary of design excellence at an outdoor party held in its parking lot at Olympic Blvd. and 17th St. in Santa Monica. Friends, family, clients, and other well-wishers were in abundance – as were the food trucks that catered the event.

The firm was started by husband-and-wife team Barbara Flammang and Wade Killefer, who met at UCLA when they were both getting their masters degrees in architecture. Flammang and Killefer live in Santa Monica and are active members of the community.

KFA has had a significant impact on the local architectural scene, having designed libraries, educational buildings, multifamily housing, and affordable housing.

KFA has also been highly influential in the movement to adapt and re-use historical buildings, especially in Downtown Los Angeles.

This wave of renovations began with the 1999 passage of Los Angeles’ Adaptive Reuse ordinance, and included KFA’s transformative efforts in The Old Bank District.

“The Historic Core of Los Angeles experienced a huge renewal, as many of its stately but abandoned office buildings were repurposed to residential use,” Killefer said. “Downtown’s population increased five-fold and we rehabilitated over 40 historic buildings.”

Closer to home, KFA has made its mark in Santa Monica as well. KFA served as architects for: Pico 11, a 32-unit development on Pico Blvd. off 11th St., which is one of the few apartment projects to be approved by the City of Santa Monica this year; Step up on Colorado, planned permanent supportive housing for homeless individuals; and Seabluff in Playa Vista, new condominiums (construction will start soon).

“Over 40 years we have learned that the best architecture comes from the best clients. We have been lucky to draw inspiration from visionaries who set high goals and pushed us toward them,” Killefer said.

Killefer is on the board of the Santa Monica Boys and Girls Club. Flammang served as board president of the Westside YWCA.

The couple raised two children, Joe and Annie, in Santa Monica. Joe graduated from Loyola High School and later, Dartmouth College. He is now in the field of construction management and development and will marry Jennifer Dunn this October.

Annie, a graduate of Santa Monica High and Bard College, has a specialty in international conflict resolution and is now in Nepal providing post-earthquake relief. Earlier this year she did a stint for Oxfam in South Sudan.