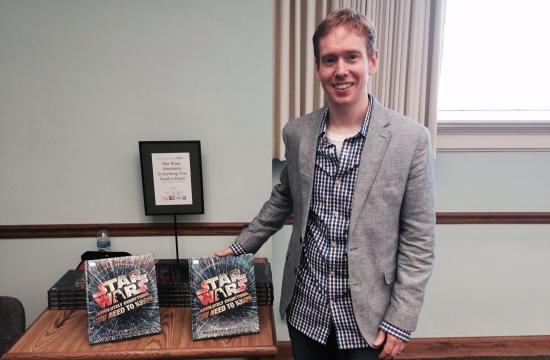 For “Star Wars” author and Santa Monica resident Michael Kogge, the last few weeks have been like a fun, fast-paced adventure aboard the Millennium Falcon promoting his new book “Star Wars: Absoutely Everything You Need to Know.”

Kogge has been all over the country taking part in book signings and on Tuesday, Sept. 15 he made a visit to the Ocean Park Branch Library in Santa Monica to join in a “Star Wars” celebration. A group of enthusiastic fans young and older took part in the event, which included a “Star Wars” trivia contest, a visit by a Stormtrooper and Jedi Master, and a chance to meet the popular author.

“It’s so exciting,” said Karen Reitz, the manager of the library. “We have so many Star Wars fans of all ages.”

With the upcoming new movie “Star Wars: The Force Awakens” coming out in December, the hype and renewed interest in the franchise has been truly out of this world. The popularity of “Star Wars” continues to soar to new heights and fans can’t wait for the new film to hit theaters during the holiday season.

Like everyone else, Kogge is anxiously anticipating the release of “The Force Awakens.” His interest goes far beyond the typical diehard “Star Wars” fan though.

“I’m in the process of writing the Episode 7 junior novel,” Kogge disclosed. “So it’s quite humbling to be walking in the footsteps of the story laid out by (director) J.J. Abrams and (screenwriter) Lawrence Kasdan. J.J. is a remarkable filmmaker. It’s great that he has been given the chance to do a Star Wars film. It will be very exciting.”

“I think everyone will be cheering and applauding,” said Kogge of the audience’s reaction to those classic characters. “It will be like a return down memory lane. It will be a grand reunion.”

Kogge’s first memory of seeing the original “Star Wars” came when he was four years old. He saw it in a movie theater during a re-release of the picture in 1981. He also saw the sequels, “The Empire Strikes Back” and “Return of the Jedi” as a youngster, and the movies made quite an impression.

“I remember as a kid being fascinated by the Cantina Scene with all the monsters,” Kogge recalled. “That’s probably my most vivid recollection.”

When he was a teenager Kogge began his work in the “Star Wars” universe.

“I’ve been writing Star Wars since I was 17, for about the past 20 years,” he said. “I started with game books and I kept expanding my repertoire and I do mostly fiction now.”

Back in the summer of 1998, one year before the much-anticipated release of “The Phantom Menace,” Kogge earned a coveted position of an editorial assistant for an internship at George Lucas’ Skywalker Ranch near San Francisco.

“It was fantastic,” Kogge stated. “Skywalker Ranch was a great place to work. They have a huge theater there for screenings. To get to each building you would jump on these red bicycles as a form of transportation.”

His journey from there has led him to writing the “Star Wars Rebels” junior novelization series (based on the Disney XD animated TV series) and his new book, “Star Wars: Absolutely Everything You Need To Know,” which came out in bookstores on “Force Friday” in early September.

“It was a fun book to write because it’s a book about all these interesting facts and unknown things about Star Wars,” Kogge said. “There was just so much research involved and it’s just such a massive book to put together. It required four authors to help put it together.”

A “Star Wars” trivia contest was held at the Ocean Park Branch Library in Santa Monica, with such questions like “how many forms of communication does C-3PO speak?” and “what kind of weapon does Chewbacca use?” (note: if you know those answers consider yourself a “Star Wars” expert).

Despite coming up with quirky facts, Kogge knows it will be hard to stump some of the most loyal “Star Wars” fantatics.

“Some of these kids know the trivia better than I do,” he admitted.

Besides his obvious love of the “Star Wars” film franchise, Kogge is also a big fan of comic books and the superhero universe. He is writing the “Batman v Superman” junior tie-in prequel novel for the Zack Snyder film coming out next March.

“It’s such a pleasure to be writing Batman and Superman,” Kogge said. “I’ve always loved those characters so it’s working with another mythology.”

Another fascinating mythology Kogge has delved into involves werewolves. His critically-acclaimed graphic novel, “Empire of the Wolf,” is about werewolves in ancient Rome.

“In high school our teacher told us about the first werewolf story,” Kogge recalled. “It kind of always stuck to me. Years later, the image and story of ancient Rome and a werewolf was still in my head and I just started developing it.”

“As I started writing I realized the story of Romulas and Remus, the two children who founded ancient Rome. They grew up under the care of a wolf. It’s kind of a werewolf story in a way. Ancient Rome still has a symbol of the two babies nursed by the wolf. I just thought this is a good foundation for a werewolf story.”

Kogge’s project “Empire of the Wolf” took a couple years to develop before coming out in late 2013. It can be found in bookstores and comic book venues.

As for the “Star Wars” mythology, Kogge still enjoys writing about a galaxy far, far away. As for his favorite “Star Wars” film, he responded:

“It’s really hard to pick between the first Star Wars movie and Empire Strikes Back. Empire is a really great film, but you can’t have that without Star Wars.”