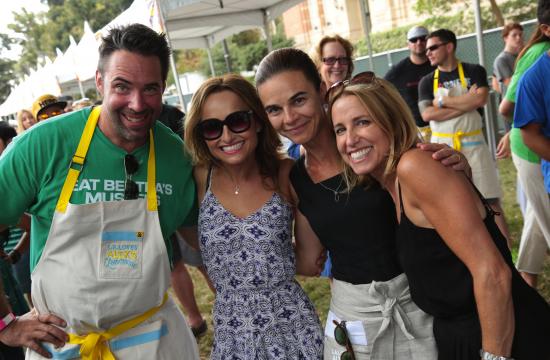 Celebrities, chefs, and celebrity-chefs came together last Saturday, Sept. 12 at a humid Royce Quad on the campus of UCLA to eat and drink their way to over $1 million raised toward childhood cancer research.

With more than 2,000 attendees and 100 chefs and mixologist basking in the event’s camaraderie and festivity, Los Angeles no doubt reinforced the namesake, L.A. Loves Alex’s Lemonade.

Patrons taste-tested a carefully curated menu as diverse as the food chain itself and schmoozed with chefs behind their favorite eateries, yielding a rare connection between Los Angeles and its food culture offered but once a year.

Whether they came from Instagram, food trucks, or Food Network fame, cooks presented their best work in a gourmet food court of sorts, replete with a raw seafood bar, wood-fire pizza oven, and truck-towed smoker.

Alex’s Lemonade Stand Foundation emerged from the front yard lemonade stand of cancer patient Alexandra “Alex” Scott (1996-2004). In 2000, 4-year-old Alex announced that she wanted to hold a lemonade stand to raise money to help find a cure for all children with cancer. Since then, the foundation bearing her name has evolved into a national fundraising movement. To date, the charity Alex’s Lemonade Stand Foundation has raised more than $80 million toward fulfilling Alex’s dream of finding a cure, funding over 450 pediatric cancer research projects nationally.

Westside Today: What happened this year that previous L.A. Loves Alex’s Lemonades didn’t have? In other words, how has the yearly event evolved since its inception in 2010?

Goin: Although the format of the day remains the same we grow every year with so many culinary friends wanting to donate their time and goods to the charity. This year we had 50 chefs and over 50 wineries, and that’s astounding. It was the biggest line-up to date. The culinary cookout is truly a trip around the United States tasting food, wine, and spirits from the best talent out there. New this year was our Kids Campaign – a group of children got together and each pledged to raise $250 themselves and encouraged their friends to raise money and donate as well. The Kids Committee presented a check for over $10,000 raised in the last six months. Also, actor Timothy Olyphant – a long time supporter of the event – created an auction package online at OMAZE which brought in $51,000 before we even open the doors! This type of grass-roots growth and participation is classic Alex’s Lemonade Stand behavior.

What was the process like rounding up all the chefs and mixologists for this year? Any different from previous years?

This is a process that takes a lot of time, and we plan months in advance. The objective is to invite people whose work we respect and keeping it the kind of event we would want to go to ourselves. Many we know and some we may have met at other events, like Marc Vetri’s Great Chefs Event in Philadelphia, and some during our travels. And things happen along the way with scheduling, so it takes a lot of strategic planning to make sure that the puzzle fits. Once we are set with our ‘talent,’ we go through all of their menus so that there is the right amount of variety for our guests and that everyone is not using the same product or similar dish.

L.A. Loves Alex’s Lemonade has spawned into more than a philanthropic event – it’s the so-called culinary celebration of the year. What efforts or characteristics have made this gathering such a success? Is it celebrities? The food? The goodwill? All of the above?

All of them contribute something, but goodwill puts it over the top. Many food and wine events are now for profit. This one is created and operated by chefs and restaurateurs who are involved because they want to help kids with cancer find a cure. Even the celebrities that attend are there for that purpose and not to get publicity for being part of a fundraiser. It’s from the heart in a huge way.

Lastly, why is this important to the hosts? What personal or professional connection underlies the operation?

Because we are parents, the story about Alex Scott hits a nerve and has become very important to us on so many levels. And because of the enormous response from the public, we know that it reaches others for the same purpose.