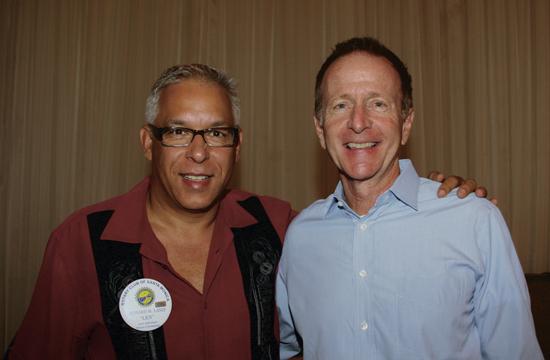 When Austin Beutner broke his neck mountain biking a few years back, he came close to death, twice. Once in the helicopter on the way to the hospital when his blood pressure dropped from internal bleeding, and another when his body went into anaphylactic shock during neck surgery.

So it was when he was staring at the ceiling from his hospital bed that he realized he would make a change, give back, and make a difference. He retired as a wealthy investment banker and became Deputy Mayor and “jobs czar” under Antonio Villaraigosa for an annual salary of $1. He then founded Vision To Learn, a nonprofit that provides eyeglasses and free eye-exams to low-income children.

“Today I try to spend most of my time on things that will make a difference for others in our community,” Beutner told Santa Monica Rotarians at their weekly meeting Friday, Sept. 18. “That’s been my journey. I think I’ll continue with that journey. I’m not sure what comes next.”

In the two weeks leading up to Beutner’s talk, his title on the calendar needed editing. The publisher and CEO of the Los Angeles Times had been unceremoniously ousted by what he called, “the Chicago overlords,” or Tribune Publishing, also the corporate parent company of the San Diego Union-Tribune, Chicago Tribune, and a handful of other local media.

With one year at the L.A. Times, Beutner accomplished more than the paper had since emerging from bankruptcy and public editorial falling-outs over job cuts.

“They seem to think the path to success is cost-cutting,” Beutner said, “which is a euphemism for firing journalists and making the product less valuable. I don’t believe in that as a valid strategy.”

Though not a journalist by trade, Beutner shared the same traits of a seasoned reporter: fair-mindedness, transparency, and, above all, humility. After all, a journalist never wants to become the story. So he focused the rest of his talk on the connection between journalism and community, something the L.A. Times – and every legacy media company – has had to re-learn.

“Each and every day we work to bring the product back to life, to make it relevant in your life. The first thing we did was re-introduce something called the California section,” Beutner said, along with a relaunched Business section.

This past year L.A. Times journalists won two Pulitzer prizes and were finalists for two more (accruing 43 in total).

On the digital side, the L.A. Times unloaded 20 email newsletters – some with open rates as high as 50 percent – as a new way to directly engage with readers and allow advertisers to target audiences. After about six months, they had 100,000 subscribers.

“We started to exercise a muscle that had atrophied or had maybe never existed to find other ways to engage the community,” Beutner said.

The L.A. Times’ “California Conversation” with Gov. Jerry Brown on the drought was held before a live audience, watched on TV in almost 1 million households, and read by more than 1.5 million people in print and online. And it worked as a business model, too, sponsored by an Israeli agriculture firm.

The L.A. Times is still on a path to find new revenue streams, be it events, TV, or digital. Beutner said a balance must be arranged rather than cause the number of journalist to shrink (there are 500 journalists at the Downtown L.A. newsroom).

“I’ve always said the most important investment we can make is in the journalists. If we’re not telling accurate stories, timely stories, really good stories, we’re not doing our job for you. And at the same time we have to find a way to continue to generate revenue.”

Beutner, who was once in a bid with L.A. philanthropist Eli Broad to buy the L.A. Times, buttressed the future of journalism in the city.

“My hope is that there are folks in Los Angeles who would like to see Los Angeles Times controlled by those who live here and care about our community, who want a paper that asks hard questions, and who want a paper to engage us and tell stories that we need to understand to have more complete lives,” Beutner said.

He thanked the room of Rotarians for their loyal subscriptions to the L.A. Times.

“I would still thank you, whether I’m there or not. The paper needs to do really, really well. It needs to survive.”