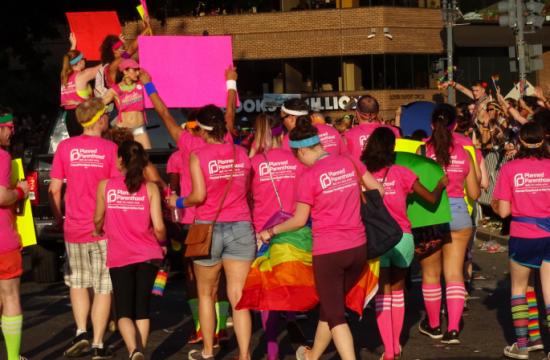 More than 300 pink-clad supporters of Planned Parenthood filled the steps outside Los Angeles City Hall Tuesday in a show of support for the reproductive health care provider, which is under threat by Republican lawmakers pushing to take away its federal funding.

The rally, attended by Los Angeles-area supporters, employees and volunteers of Planned Parenthood, was one of several “National Pink Out Day” events organized across the country in response to a recent wave of attacks from anti-abortion activists, Republican lawmakers and presidential candidates.

Vazquez said the organization serves 150,000 women and men each year through its 20 health centers in Los Angeles County.

A bill that would have defunded Planned Parenthood was recently approved in the House, but failed in the Senate. President Barack Obama has threatened to veto any bill that removes federal funding for the reproductive health care provider, if it ever reaches his desk.

Yesterday’s event was accompanied by a counter-rally put on by a handful of anti-abortion activists holding signs reading “GoFundYourself” and displaying large images that appeared to show dead fetuses.

The Los Angeles City Council in August approved a resolution supporting Planned Parenthood in the wake of the recent attacks.

Supporters of defunding the group point to a video released in July by anti-abortion activists that appears to show Planned Parenthood officials attempting to sell fetal tissue. Some lawmakers also point to the nonprofit’s financial support of the campaigns of Democratic politicians.

Planned Parenthood has countered that the video was heavily edited and misleading, and that abortion procedures make up a small portion of their services. They also say the federal funding they receive goes mostly toward providing reproductive health care, such as cancer screenings and preventive and educational programs.

Councilwoman Nury Martinez, one of the co-authors of Los Angeles’ resolution, joined today’s rally and spoke emotionally about her support for Planned Parenthood.

“We will not stand for the relentless assault on reproductive health care rights for all people,” she said.

Martinez said as a 16-year-old in Pacoima, she served as a Planned Parenthood peer advocate whose job was to “talk to my peers that look like me and spoke my language about how to prevent a sexually transmitted disease.”

“Thousands and thousands of young people were spared from having to contract an STD” because of the programs and resources Planned Parenthood offered in Sun Valley, Arleta, Van Nuys and other communities, Martinez said.

By Toi Creel A Santa Monica pediatrician is raising some eyebrows about his speculations made in a censored social media...