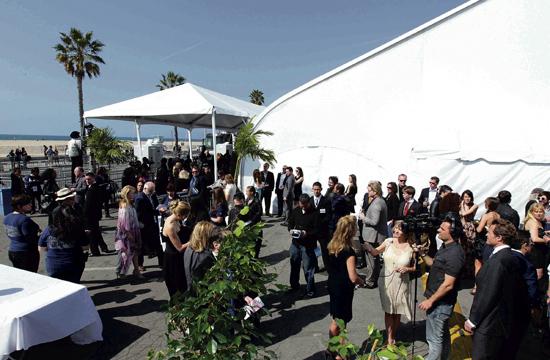 The Independent Spirit Awards is moving, but it will remain in Santa Monica next year.

Formerly held at the parking lot at 2030 Ocean Ave., the new location of the Spirit Awards will now be held at the 1550 beach parking lot on Pacific Coast Highway – directly north of the Santa Monica Pier and the site of previous touring Cirque du Soleil performances.

One reason for the change is that past events at the former 2030 location were deemed as “disruptive” so a decision was made to change the locale, according to Judith Meister, the Beach Administrator for the city of Santa Monica.

But while the awards show will now have a new location, it should still capture the “spirit” and artistic values of Santa Monica.

“People wanted the Spirit Awards to stay in Santa Monica, and this was the only option,” Meister said.

Next year’s Independent Spirit Awards will take place on Feb. 27, 2016. As usual, it will be held inside a large tent in about the same amount of space as the previous location, according to Meister. Local fans expect to line up before the show starts and watch celebrities parade around the Red Carpet.

The Independent Spirit Awards, which started in 1984 but moved to Santa Monica in 1993, has attracted some of the biggest names in Hollywood. Some past winners include Jennifer Lawrence, Matthew McConaughey, Jeff Bridges, Chalize Theron, Mickey Rourke, Cate Blanchett, Philip Seymour Hoffman, and Natalie Portman.

The ISA are presented by Film Independent, a non-profit organization dedicated to independent filmmakers. Since 1994, the show has been broadcast on the Bravo Network and Independent Film Channel