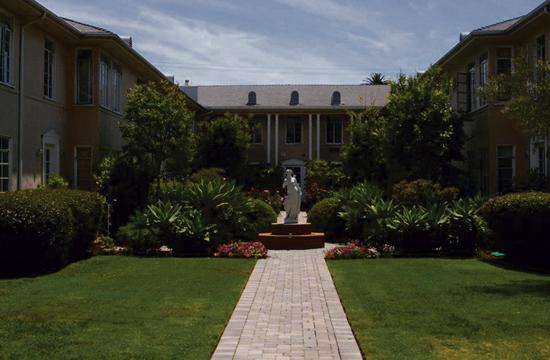 The Santa Monica Conservancy invites all to their next community meeting to introduce and discuss the recently nominated San Vicente Boulevard Historic District.

The City of Santa Monica Planning and Community Development Department will be conducting this informational meeting to describe and answer any questions that impacted property owners, residents and/or tenants may have concerning the historic district designation process, the effect of a historic district on future development, and the benefits and incentives offered to those who may be included in the historic district.

Courtyard housing is unique to Southern California. This corridor contains the most significant and cohesive concentration of courtyard buildings in Santa Monica, creating a distinctive neighborhood of architecturally noteworthy buildings built between 1937 and 1953. The buildings are two- and-three stories, configured around a landscaped open space, and designed in various architectural styles such as Streamline Moderne, American Colonial Revival, and Mid-Century Modern. If designated, this district will become the third Historic District in Santa Monica.

Watch below to learn more about the historic San Vicente courtyard homes: