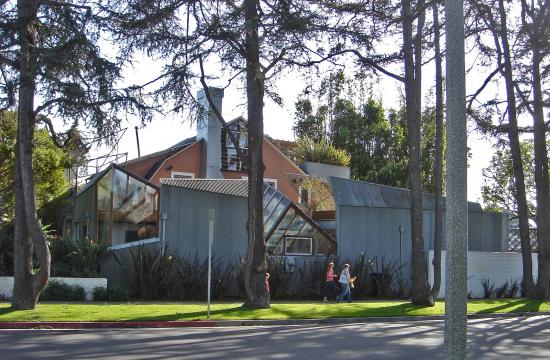 “There have been very few individuals in all of history who have changed the course of architecture, and Frank is one of them,” J. Paul Getty Trust President and CEO James Cuno said in May when the honor was announced. “He effectively reinvented architecture with his use of new technologies in the design of beautiful and iconic buildings. And architecture will never be the same as a result.”

During more than five decades of work, Gehry’s architectural career produced iconic buildings in North America, Europe and Asia, and earned him awards in the field, including the Pritzker Architecture Prize, perhaps architecture’s premier accolade.

Other honors include the National Medal of Arts, Ordre National de Legion d’honneur Commandeur from the French government, Golden Lion Lifetime Achievement Award at the Venice Biennale and others.

In all, Gehry’s buildings have received more than 100 national and regional AIA awards. In 2010, Vanity Fair conducted a survey of architects to determine the most important building of the last 30 years and named Gehry’s Bilbao museum the winner.

Raised in Toronto, Canada, Gehry moved with his family to Los Angeles in 1947. He received his bachelor’s degree from USC in 1954 and studied city planning at the Harvard University Graduate School of Design. He founded Gehry Partners LLP in Los Angeles in 1962, an architectural firm that developed extensive international experience in the design and construction of academic, museum, theater, performance and commercial projects.

“Frank holds a special place in his art for the work of contemporary artists,” Cuno said. “He was a central figure in the contemporary art world in Los Angeles in the 1960s and 1970s, working closely with Billy Al Bengston, Larry Bell, John Altoon, Bob Irwin, Ed Moses, Ed Ruscha and Ken Price.”