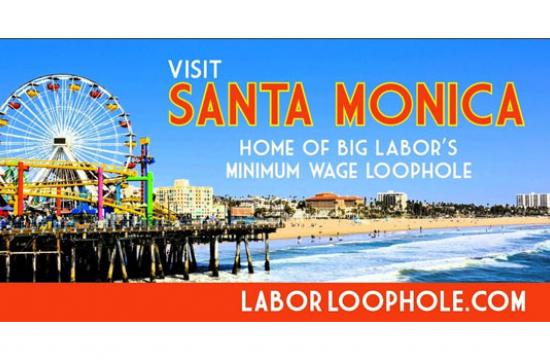 In anticipation of the Santa Monica City Council vote tonight to match Los Angeles’ $15-by-2020 minimum wage, the Los Angeles Times and a Washington, D.C., think-tank are calling out city leaders.

In an op-ed written by the Times Editorial Board published this morning, the paper lamented “hypocrisy by labor leaders who had publicly fought efforts to exempt restaurant workers, nonprofits and small businesses from the new minimum wage, yet quietly lobbied for companies to have the right to pay union workers a sub-minimum wage.”

In a similar effort, the nonprofit Employment Policies Institute (EPI) placed a full-page ad in the Santa Monica edition of today’s Los Angeles Times, as well as a mobile billboard that will circle City Hall, criticizing the labor loophole in the city’s proposed $15 minimum wage.

Tonight the Santa Monica City Council is expected to consider a $15 municipal minimum wage, from which it currently plans to exempt unionized businesses. A similar collective bargaining exemption faced national backlash in Los Angeles this summer.