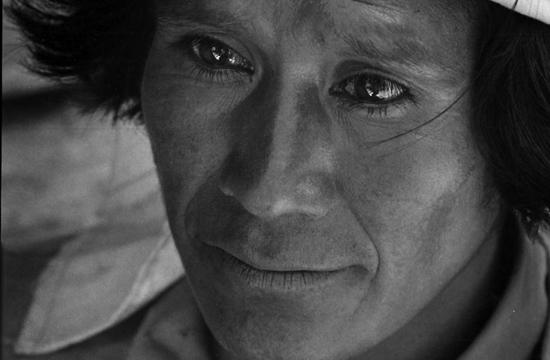 A brilliant thinker, Tony Gleaton created a singular life pursuing the visual expression of what it means to be human. He held a profound respect for each and every person. This respect informed his art, his photographs, his life’s work.

Gleaton’s belief in the principles and values of the Declaration of Independence and the U.S. Constitution were strong. He was a patriot. He enlisted in the Marine Corps at age 18 during the Vietnam War.

Gleaton was a serious man with an irreverent sense of humor. This gift of humor gave him an extraordinary skill as he navigated the contradictions in his own life. He was an artist with a profound commitment to his work. He had lived through turbulent times in the U.S. He was a very tall and very large, light-skinned, green-eyed African-American man. Prejudice and discrimination were part and parcel of his daily life.

Respect for the humanity of each person, intelligence and an irreverent sense of humor gave Gleaton entrée just about anywhere he wanted to go. His work took him to the mountains of Oaxaca, Mexico, to the northern-most coast of South America and to the American West.

Gleaton’s photo lecture, “Race as a Social Construct” was born out of this work. In that lecture he proposed not just an end to racism but also that we think of race so differently that our consciousness of race is changed. The lecture was presented to large audiences at UCLA and other universities in the U.S.

“Race,” Gleaton said, “is a social construction. It is not a bio-empirical fact. Ideas and racial definitions come out of the historical, sociological and psychological need to quantify and categorize.

“My thoughts regarding the question of racial construction are at best conditional. They are shaped out of my own personal history.

“Unknowingly, and in some cases knowingly, conversations about race, its meaning, social significance and definition often take place within the confines of a particular historical, social and psychological memory, which is formed both collectively and individually ….”

Much as he sounds, and was, the professor – having taught at Texas Tech University in Lubbock Texas and at the University of Michigan at Ann Arbor, he was, first and always, an artist.

In the 1970’s Gleaton decided to leave UCLA, where he was studying art and history and go to NYC to make his way in the studios of fashion photography.

Coming to LA for a short break from the NYC winter Gleaton talked about his disgust with fashion photography, which he likened to the betrayal of young girls. Out of that disgust grew the idea that he would, at whatever cost, make his own way and that his photographs would be how he communicated with the world. That decision shaped his work and the rest of his life.

Gleaton went on the round up and cattle drive with cowboys in the American West. His photographs of the cowboys at work redefine the myth of the American cowboy and the participation and contributions of African-American, Latino and Native American cowboys.

Gleaton traveled by bus and bicycle to Oaxaca, Mexico. He lived in the villages and became known in the local communities. Gleaton’s photographs are stunning for their art and for his essential point – his respect for the people.

Gleaton followed on land the sea route of the old slave ships along the northern edge of South America. He photographed the people now living along that route. On that photo journey he learned that people who may have been the descendents of slaves defined themselves, not by race, but by their country, their indigenous ancestry or their name origin.

Gleaton’s last work focused on landscapes, on places important in the history of the United States. Places where people lived and sometimes fought and died. The people are no more but he honors their memory is his landscape photographs.

“I believe that the value of these photographs lie not in the fact that they provide answers. Their value is in, by viewing them, they provide us a place in which we choose to ask questions,” Gleaton said of his work.

The choice to be an artist could be seen as a hard choice. Gleaton’s lifestyle itinerant, money scarce, loving and loved and married and divorced three times because of his commitment to his way of making art. For Gleaton it wasn’t a choice. The only life he wanted was the life of an artist.

At long last, there was Lisa Ellerbee, a High School Teacher and Principal in San Mateo, California. They married in 2005 and they came to terms with his commitment to his work and his long absences. Lisa Ellerbee Gleaton was with him when he died on August 14, 2015 at the Veterans Hospital in Palo Alto, California. Gleaton was buried with full military honors at the National Cemetery in Dixon, California on Aug. 26, 2015.

Gleaton navigated his life with an unrelenting dedication to his work, a sense of humor that was the delight of his friends, a generous heart, and a kind spirit. He was beloved by many people, among them my children, now adults, and me. He made the world a kinder and more thoughtful place. It was a blessing to have known him. He is missed.

By mirrormmg September 4, 2015
in Life and Arts, Opinion
Related Posts